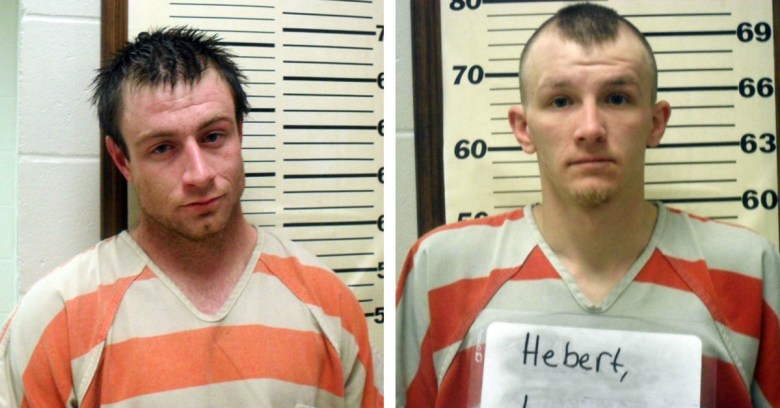 Two Missouri men have been arrested for allegedly spoofing the police department’s phone number to scare a couple out of their home so that they could burglarize it.

According to the local paper Houston Herald, on Saturday, 30 January, Marna Streetman got a call at 10:30 a.m.

The caller identified himself as an undercover officer with the Missouri State Highway Patrol.

His story: he was working on a sexual offense case with the West Plains Police Department. They’d arrested a man, he said, and found that he had photos of the Streetmans’ 23-year-old daughter.

The police, purportedly in pursuit of a second suspect, had reason to believe that the Streetman’s daughter was in danger, he said.

You’ve got to drive over to West Plains immediately, he said. Get her to a safe location until we nab this guy.

The real cops said that the bogus cop turned out to be James J. Woolsey, 25, of Summersville, Missouri.

He, along with Lenny J. Hebert, 27, of Hartshorn, Missouri, allegedly hopped over to the Streetmans’ house after scaring them out, where they proceeded to steal firearms and apparently try to steal a car.

The two have each been charged with second-degree burglary, first-degree tampering with a motor vehicle and three counts of stealing a firearm.

In addition, Woolsey, already a convicted felon, was also charged with unlawful possession of a firearm. Hebert was reportedly already on felony probation.

Streetman told the Houston Herald that she didn’t believe the caller at first, so she tried to trip him up:

I didn’t believe him. I told him it didn’t sound right.
I said ‘OK, Tell me where my daughter lives.’ He told me exactly where she lives, and not many people know where she lives.

The reason the suspects knew all the answers was that they’d both gone to high school with her, it turns out.

She ignored that advice and called her daughter from her husband Louie’s phone.

No time to explain: we’re on our way, she told her daughter.

I told her to lock the door, get your gun in one hand and phone in the other.

Streetman didn’t just drive over to get her daughter out of supposed harm’s way, though: the suspicious woman kept acting on her hunches.

And that, in fact, is how a neighbor managed to spot the alleged burglary in progress.

How did the caller manage to convince this suspicious woman in the first place?

He did it by using one of many tools out there that allow anybody to disguise their identity by sending fake information to caller ID.

What is caller ID spoofing?

Caller ID spoofing apps aren’t illegal, but using them to harm or defraud somebody is.

Caller ID spoofing is often used to try to trick someone into giving up valuable personal information so it can be used in fraudulent activity or sold for identity theft.

It’s also increasingly used in the act of swatting, when fake calls are placed to emergency services.

As we’ve written with regards to fraudulent calls targeting US banks, caller ID spoofing can be particularly convincing in the US, given that the call display service used by most phone companies here does a reverse lookup for the name information based on the caller ID number provided by the call.

Once a criminal determines the phone number he wants to have fraudulently show up as his caller ID number – in this case, the number for the local police – it’s trivial to display that number on the call recipient’s display.

What to do if you suspect you’re being spoofed

In the US, the Federal Communications Commission has released a guide warning consumers about caller ID spoofing.

In the UK, Ofcom offers this guide.

As you can infer from the tips above, spoofing crooks usually stick to identity theft, unless they’re pulling a stunt like swatting.

What about when a caller identifies himself as being a cop?

So she hit redial on her iPhone to call the number back, to verify whether it was a real law enforcement agency. (Mind you, it’s best to look up the calling party’s number on your own instead of just dialing back the number the call came from.)

West Plains Police Department did, in fact, answer the call, but they couldn’t identify the officer based on the fake name Woolsey had given her.

But hey, Woolsey said he was an undercover cop. Maybe he was using an alias, or working unidentified?

Then – smart woman! – she called a neighbor and asked him to check on their home.

The neighbor said he’d check after his chores – he’s a dairy farmer – were finished.

When he did check, the neighbor spotted a strange man in the yard and another man inside the patio door of the Streetman’s house.

Given Ms. Streetman’s example, maybe we should add another tip onto that list of how to handle caller ID spoofing: “Be suspicious, and keep acting on your hunches!”