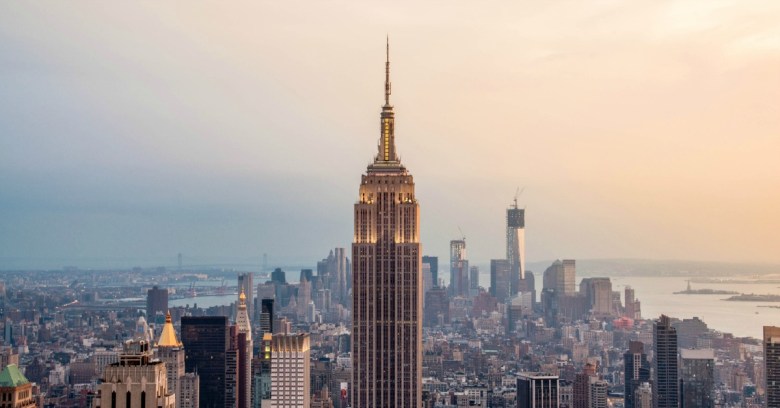 In our latest episode of Drones Gone Wild, we report on New Jersey’s Sean Riddle, who flew his drone into the Empire State Building while filming last Thursday night.

(In Mr. Riddle’s defense, there may be another way to look at the incident. As New York Magazine put it, the Empire State Building very rudely got in his way.)

As befits our 21st century, Mr. Riddle tweeted his misadventure.

He then requested assistance from building security to retrieve his drone, which had crashed into the 40th floor and dropped several flights onto an outer ledge.

Reportedly, the guards promised to help, but instead called the NYPD who promptly arrested him. (New York’s authorities remain understandably quite sensitive about aircraft flying into their iconic and well-occupied structures.)

Riddle, who says he “asked a cop 20 minutes before [he] did it”, faces charges of reckless endangerment, misdemeanor criminal mischief, and avigation in and over New York City. (Yes, “avigation”: navigation in the air. It’s a real word: if you learn something every day, today’s now officially squared away.)

Fortunately, there were no injuries, though it’s not clear if the drone’s still loose up there, or if it’s been secured as evidence.

The US Federal Aviation Administration is reportedly investigating.

The FAA can add this incident to the big pile of drone “events” near major airports that we told you about last week. Or perhaps the unnamed San Franciscan drone operator who decided the best way to help the homeless was to bombard them with Burger King Whoppers.

Or maybe this disastrous experiment in drone-based wedding photography. Or, of course, last year’s fun flight onto the White House lawn (whose perpetrator ultimately escaped charges).

But can you actually fly a drone legally anywhere in New York City? Good question. With three major airports nearby, much of the city’s airspace is officially controlled by the FAA.

Beyond that, as happened to Mr. Riddle, NYC police can charge someone with reckless endangerment whenever they believe a drone is behaving unsafely.

The city has set aside a few park fields for model-aircraft-type contraptions. But even if you’re “avigating” there, it behooves you to fly extra safe.

According to WCBS-TV, if Parks Enforcement officers catch you breaking the rules, they might even report you to the NYPD’s counter-terrorism division. No joke, says NYPD Deputy Chief for Counter-Terrorism Salvatore Di Pace: “We do an extensive background check. Our intel division gets involved.”

So if you’re planning a visit to the Big Apple, it’s always good travel advice to pack light. Leave your quadcopter at home.