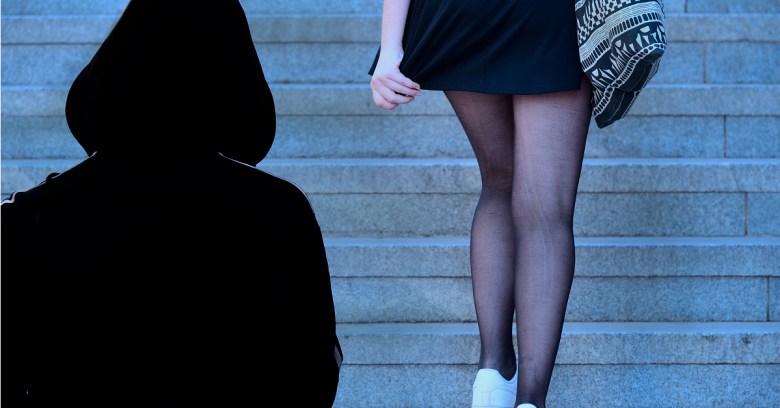 It’s been called “the creepiest ‘social network’ ever”: you sign up, and some woman follows you around all day, watching your every move.

How does she know where her surveillance targets are?

Because they’ve willingly signed over access to their iPhones’ location data.

Her targets constantly share their location with her app, which is called, appropriately enough, “Follower.”

Well, on the “followee” side of it, some people aren’t quite satisfied with the random, sort-of anonymous interaction you get on a site like Twitter, the premise goes.

As outlined in an introductory video, those craving a follower want to share their day with somebody, but they might not want to go through the work of establishing an actual relationship.

From the site’s FAQ:

We imagine it might offer some other form of interaction or relationship you have not had before, perhaps a way to experience new feelings, a different way of being in the world. Maybe it adds a little excitement or magic to your day, maybe it gives you a different perspective on your life.

As far as the “follower” side goes, the why is that it’s an art project being undertaken by Lauren McCarthy, an artist, programmer and “provocateur” who teaches at the Interactive Telecommunications Program (ITP) at New York University’s Tisch School of the Arts: a hands-on, DIY maker program.

She’s the one who follows.

If you’ve applied to be followed and have been selected – sorry, this is only for iPhone now, only available in New York City, and only for people who don’t completely freak out McCarthy and her team with their “why I want to be followed”/”why you deserve to be followed” essay – you’ll get a link to install Follower.

Then, you can sit back and await the date of your following.

She promises to give you that eerie feeling of somebody watching you, all day, as she lurks, staying “within your consciousness but just beyond your sight – following, observing, appreciating each moment, without interfering.”

You’ll be notified at the end of the day that your following has ended.

You’ll get a surveillance photo to remember it by.

Although McCarthy is the only one following, Follower has an application form for others who want to become followers.

Follower raises a lot of questions, to put it mildly: how in the world do you vet somebody who wants to follow strangers around? How do you maintain your own safety when you’re following a stranger? And just how is that location data being protected, so nobody can intercept it?

All those questions are exactly what McCarthy is after: she wants to spark dialogue about privacy, surveillance, security, and interaction technologies.

And yes, before you ask, McCarthy is quite familiar with creepy location-based apps and the safety and privacy issues they raise, be it…

Follower is the latest of McCarthy’s projects, all of which explore themes of surveillance, intimacy, interaction and relationships.

She was kind enough to take the time to answer these questions in an email conversation about Follower:

Naked Security: How would you vet a follower to make sure they’re not dangerous?

McCarthy: I am the only [follower], and having lived with myself for 28 years, I have determined that I’m not dangerous. Of course, there is the concern that if I let any random stranger follow people around it could be quite risky. I didn’t want to run this risk or have to figure out a vetting strategy, so there are no followers except me, the artist.

I am an artist and this is a performance art project, it’s not really a startup/service/app.

I am not choosing anyone that fills in the apply to be a follower page. The page is there just to pose the hypothetical question, “Would you rather be followed or a follower?”

Naked Security: How would you vet a followee to ensure they’re not dangerous? If you’re following them, they could lure you into something scary, I imagine.

McCarthy: I keep my wits about me, and if the situation seems at all dangerous, I stop following. I also only follow in public spaces, I don’t ever enter private spaces. I also only accept applications from people that seem relatively safe based on their explanation of why they want to be followed.

Naked Security: Have you followed anybody yet? Any feedback?

McCarthy: In the month of January, I followed 15 people that willingly applied, downloaded the app, and requested the following. The feedback was very positive.

Naked Security: Are you comfortable sharing your own location data?

McCarthy: Only occasionally with people I trust. I will share my location for example with my fiance or a friend from time to time. But I explicitly avoid replying to Facebook events or using Foursquare because I think there are many people more dangerous than me out there that I do not want to necessarily know where I am.

Naked Security: How careful are you about what you share online? For instance, do you share posts publicly, or just with friends?

McCarthy: Only with friends.

Naked Security: What have you done to ensure the security of the location data you’re collecting?

McCarthy: The server that handles all location data runs on HTTPS. It is just the website that is HTTP.

Naked Security: You said that the point of this project is to cause people to reflect on their views about surveillance and their desire for attention online, and to promote greater awareness. But the project, at least as far as I can see from the site, doesn’t discuss the potential danger of sharing our location data. Where does the conversation about surveillance take place?

McCarthy: As it is an art project, I prefer not to spell out what people should think. My job is not security educator; it is provocateur.

When I teach about surveillance in class, there is much explicit discussion. When I am performing an art piece, I prefer to ask questions, rather than instruct or explain.

However, I do take precautions like using HTTPS and not allowing anyone to follow because there is a difference for me between asking questions at the fringe of the socially acceptable vs. putting people in harm’s way to explore those questions. My goal is to provoke but never endanger. And not even artists transmit private data in the clear anymore.

McCarthy pointed out that she’s only one of many artists who’ve explored these issues.

She suggested that Follower can be put into context with projects such as one from the 60s, in which Vito Acconci did a similar piece without technology, Sophie Calle’s hiring of a private detective to follow her, or Jill Magid’s use of the Liverpool CCTV system to serve as her watcher.

Readers, what’s your take on Follower? Do you have any interest in following, or being followed?

Image of Woman being followed courtesy of Shutterstock.com

5 comments on “Follower: the “creepiest social network” that follows you in real life”