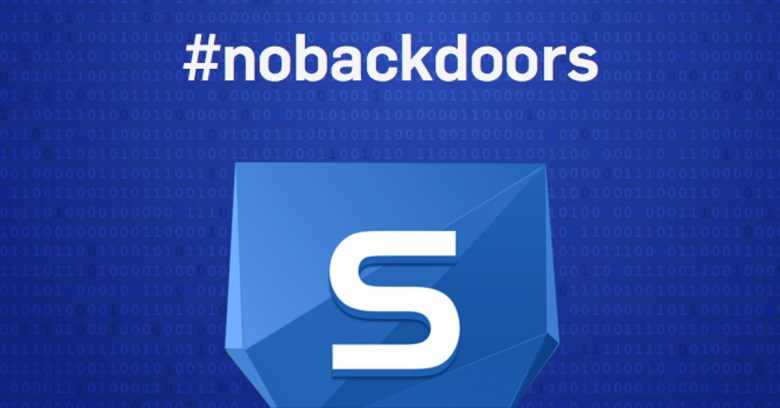 Forget ransomware, forget the Internet of Things, forget all the other computer security stories of recent days…

Simply put, IT backdoors are deliberately-programmed weaknesses that give you a way to sidestep computer security when it suits you.

A bit like hiding a spare key to your house under the doormat, in case you lose your regular key while you’re out shopping.

…but, hey, as long as no one thinks to look under the mat, you should be OK.

Sadly, everyone knows to look under the doormat, so your well-chosen lock is as good as useless.

That’s exactly the same risk that we face if we accept programmatic backdoors in computer security products.

And it’s why, whenever we write about backdoors on Naked Security, our readers generally groan in collective dismay, leaving comments along the lines of, “What were they thinking?” or “Why did anyone ever imagine that could end well?”

Examples of tricks used to implement password backdoors include:

All of these approaches carry obvious and massive risks:

In the plainly-spoken words of the Information Technology Industry Council: “Weakening security with the aim of advancing security simply does not make sense.”

We agree, and that’s why we’ve published our own #nobackdoors page right on the Sophos website.

Standing up for #nobackdoors is especially important right now, as Apple prepares to fight a US court order that as good as demands the company to come up with a backdoor to allow the FBI to access a passworded iPhone that’s part of a serious criminal investigation.

It’s a socially and emotionally charged case, because the FBI only wants to “backdoor” a single iPhone, and it’s one that was used by Syed Rizwan Farook.

Farook isn’t around to reveal the password himself: he was shot dead, along with his wife, after killing 14 people and seriously wounding 22 in a mass shooting in San Bernardino, California, on 2 December 2015.

Nevertheless, Apple is determined to stand its ground, arguing that to create a programmatic backdoor, even in a dramatic case like this, would open a password-cracking Pandora’s Box.

Unsurprisingly, other American companies, including Google, WhatsApp and Microsoft, are backing Apple and saying, #nobackdoors.

And so is Sophos, because weakening security with the aim of advancing security simply does not make sense.