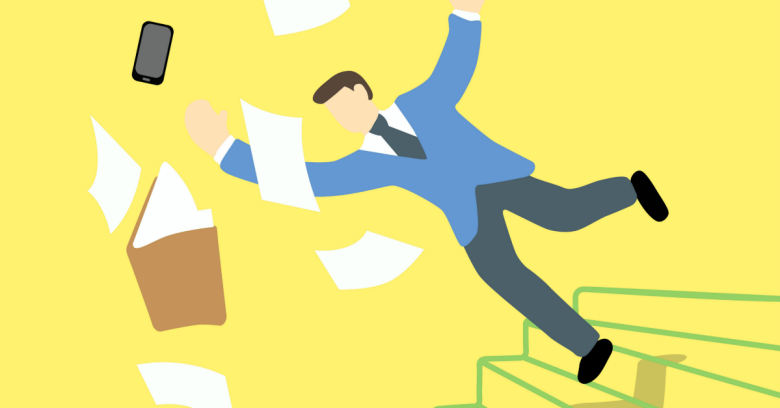 Salisbury Cathedral, built in the 13th century and home to an original copy of the 800-year-old Magna Carta, has a peculiar, 21st-century problem.

A sculpture installed on the grounds of the cathedral had to be moved last week because people kept walking into it in the dark and while looking at their mobile devices.

The sculpture, called The Kiss, depicts two giant hands clasped together as if in prayer, and was initially placed over a pathway, inviting people to walk through it.

At 20 feet tall and weighing one ton, the enormous sculpture is constructed of wire-frame and covered with gray, see-through material.

Artist Sophie Ryder said the sculpture had to be moved because “people were walking through texting and said they bumped their heads.”

A video posted on Ryder’s Facebook page showed the sculpture being lifted with a crane and moved away from the walking path.

Canon Dr. Robert Titley, Canon Treasurer at Salisbury Cathedral, told me in an emailed statement that the main concern was people bumping into the sculpture in the dark.

People can still walk through it, but the cathedral has moved the sculpture off the pathway and onto the nearby grass, Titley said:

We are glad to be hosting Sophie’s works and delighted with the way they are attracting people of all ages. The Kiss is a particularly magnetic piece which draws you to walk under it. We have found that some find it hard to spot at night, however, so we have moved it off the pathway and onto the grass nearby. Visitors can still walk under it – and children are already playing round it – but no-one using the path in the dark will bump into it.

Several of Ryder’s sculptures are on exhibit at Salisbury Cathedral until 3 July 2016, including The Kiss and another one depicting a giant creature with a rabbit head and a human body.

It’s not just sculptures that people are banging into while texting – I’ve seen people in my home city near Boston walk directly in front of traffic without even looking up from their phones, narrowly avoiding an accident that could injure themselves or others.

And I’ve been knocked into a few times by people who were so consumed by their mobile devices that they were oblivious to a human being standing right in front of them. (Disclosure: I’m sure I’ve been guilty of the same inconsiderate behavior).

Some places are trying to make people at least think about staying out of the way of other people while texting and walking, although what people do is another matter.

A university in the state of Utah painted stark yellow lines on its campus last June, dividing walkways and staircases into three lanes: walk, run and text.

And in 2014, the Chinese city of Chongqing added lines along sidewalks marking “cellphone lanes.”

Beyond texting, there’s also been a surprising number of deaths in recent years caused by people carelessly taking selfies in dangerous spots and situations.

Some parks and tourist spots have begun to demarcate “no-selfie zones” to keep people from falling down stairs, off cliffs, or into the open mouths of wild animals.

Personally, I don’t think we need any laws banning texting-while-walking.

But public awareness campaigns like “no-cellphone” lanes aren’t such a bad idea.

Image of falling down stairs while texting courtesy of Shutterstock.com.