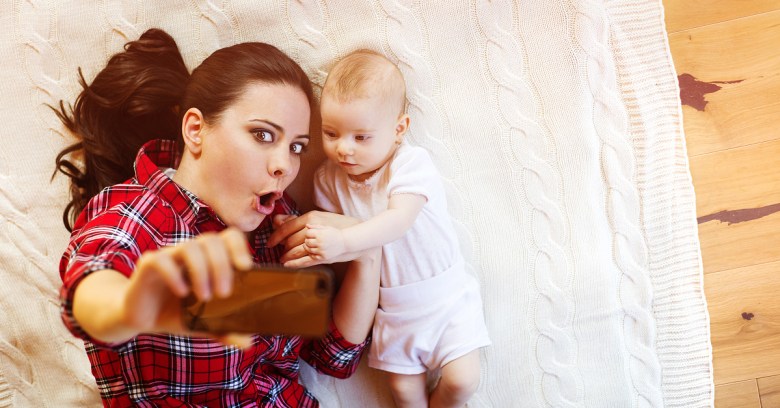 Do you wish that there were a place to send your friends who splatter pictures of their kids all over Facebook?

There is. It’s called jail.

But first, you have to talk them into moving to France, where privacy is as sacred as free speech.

Then, you have to wait until their little moppets grow up and sue their parents for spreading their mugs all over the internet.

As the French newspaper Le Figaro reports, French parents are being warned that they could be jailed for posting their kids’ photos online or face stiff fines for breaching their right to privacy or jeopardizing their security.

In the wake of a chain post on Facebook called the Motherhood Challenge – there seem to be a few variations, but the idea is for mothers to post pictures that “make me happy to be a mother” and to then share the request with 10 others – the French Gendarmerie started warning parents of the dangers of posting photos of their kids.

Last Tuesday, 23 February, It posted this warning to parents on its Facebook page:

What exactly are the dangers?

They start at the merely creepy. Say, when online role players photo-nap kids and list them for adoption.

Pedophiles, of course, photo-nap kids for their own use.

The dangers to parents, depending on how their kids turn out: posting photos could wind up in some nasty legal surprises down the line.

France has some of the toughest privacy laws in western Europe.

Penalties can be as harsh as a year in prison and a fine of €45,000 (£35,000, $49,000) for those convicted of publicizing intimate details of the private lives of others without first getting their consent.

Eric Delcroix, an expert on internet law and ethics, told Le Figaro that after the kids in the current tsunami of social media-shared photos grow up, they could “easily” take their parents to court for publishing photos of them while they were younger.

Teenagers are often criticized about their online behavior, but parents are no better.

Viviane Me Gelles, a lawyer specializing in internet law, told Le Figaro that conflict is already emerging among couples divided on the issue of exposing children on social media.

She pointed to Article 9 of the Civil Code, which explains that parents are responsible for protecting children’s images.

In addition, were a couple to separate, they’d be well-advised to consult each other before publishing images: otherwise, one could sue the other, she noted.

Jay Parikh, vice president of engineering at Facebook, in November said that the company’s developing a “whoa, are you SURE?” message to warn parents when it looks like they’re accidentally posting photos of kids without restricting their privacy settings:

If I was putting online a photo of my kids playing in the park, and I accidentally shared it with everyone, the system could say: ‘Hey, wait a minute, this is a picture of your children. Usually you only send them to members of your family. Are you sure you want to do this?’

The plan is to use facial recognition to spot kids in photos and to notify parents before they share publicly.

France isn’t the only country whose police are trying to stop what Le Figaro dubbed the “avalanche of cute clichés.”

Police in Germany have likewise urged people to stop posting photos of their children online, noting that people freely post pictures of nude children while in a pool or at the beach, as if there were no such thing as consequences.

We’ve printed this eyeball-popping statistic before, but let’s haul it out again, in order to quantify the population of consequence-ignoring parents: the average parent uploads 973 photos of their child on social media by the time he or she reaches the age of 5.

The study from whence that number derives came from The Parent Zone.

It found that a sizable portion of those images are being posted by people who just don’t seem to get the need for privacy or understand how to use privacy settings, or maybe both: 17% of these posting-happy parents have never checked their Facebook privacy settings at all, while almost half (46%) only checked once or twice, despite Facebook being the number one spot for sharing kid pics.

This is obviously an uphill battle for police in France, Germany or any country.

But at least in France, they have ferocious privacy law to back them up.

Image of Mother taking selfie with baby courtesy of Shutterstock.com