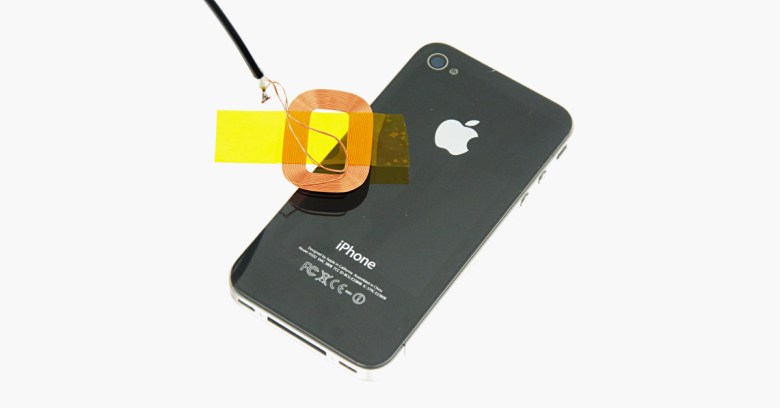 The interference was a side-effect of your phone waking up and saying to the local network, “Here I am! You can put that call through to me here.”

Obviously, a mobile phone is supposed to give out electromagnetic radiation, but the strength and the pattern of the “Here I am” communication was especially noticeable and recognisable, even when the eavesdropping circuitry was no more sophisticated than the wiring and the loudspeaker inside some nearby device.

As you can probably imagine, you can dig much more precisely into what a phone is up to if you introduce a targeted receiver and a dedicated signal-processing computer.

And that’s what researchers from Israel and Australia did recently when they set out to see what they could learn from you if they were able – literally and figuratively – to hide under the table while you used your iPhone: 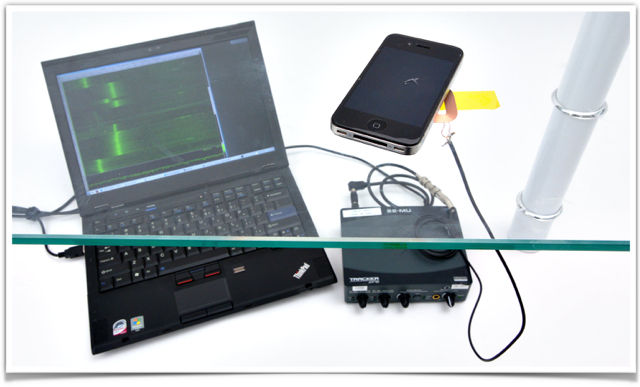 The receiver coil in the photo is a magnetic probe (the researchers say it cost about $2, but you could wind your own if you wanted to) that generates a tiny and ever-changing current as the electromagnetic fields around it wax and wane.

The signal processing is done by a sound digitiser, which conveniently converts the output of the coil into a waveform that is sent over USB, and by the laptop that receives the waveform.

The researchers focused specifically on the emissions that happened when specific parts of specific software ran, namely the programming responsible for certain sorts of digital signature validation in the following cryptographic libraries:

The researchers found that they could sometimes differentiate between two special sorts of arithmetic calculation inside the code used for a specific sort of digital signature called the Elliptic Curve Digital Signature Algorithm (ECDSA).

In particular, they could tell when the code was doing a DOUBLE (multiplying by 2) and when it was doing an ADD.

You’re probably thinking, “You can tell when the program is doing plus and when it is doing times. So what?”

Cryptographic arithmetic isn’t usually quite as easy as 2+2 or 3×5, because the numbers involved are often hundreds of digits long. The calculations are more like “multiply the number of protons in the universe by all the possible games of chess, and add the distance to Alpha Centauri in nanometres.”

But it turns out that by tracking which operations happen in what order, you can tell what’s happening inside the algorithm; those patterns, in turn, are determined by the values of the individual bits in the input.

So, if the input is the cryptographic key itself, its internal structure produces a sort-of electromagnetic rhythm that leaks information about which bits are 1 and which bits are 0.

By way of analogy, imagine that you asked me to add up a long column of digits aloud, one by one, moving the point of my pen down the column to keep track of the process.

If all you knew is how long my pen spent pointing at each digit, you’d still almost certainly be able to guess where the zeros were, because I’d skip over them and not say anything, so they’d stand out in your timing data.

You might also find I’d be a bit slower adding the 8s and 9s than I would be adding the 1s and 2s, so you could use that to guess at yet more of the digits in the list, and so on.

The researchers also claim that they can attack an iPhone attack by monitoring power supply fluctuations, rather then emitted radiation, using a booby-trapped charger cable: 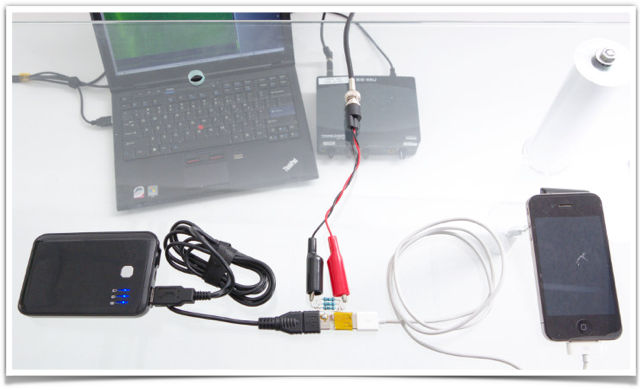 They tried Android phones, too, but apparently had some trouble, because they needed lab-grade equipment to sniff out the DOUBLEs and ADDs on their Xperia x10: 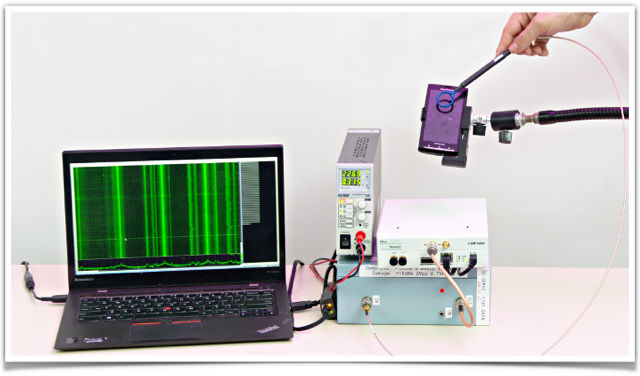 This attack is difficult to pull off, unless you regularly hang out in coffee shops where bringing your own lab equipment is de rigueur.

Attacker also need measurements from several thousand different digital signatures using the same key in order to have a chance of figuring it out – and that’s an awful lot of activity on Apple Pay or in the Google Play Store.

Better yet, if you have iOS 9 or later, any apps that use Apple’s built-in crypto library appear to be immune anyway.

In other words, even the richest and most determined attacker is unlikely to try this approach, given its very low chance of success, the complexity of setting the whole thing up in the first place, and the plethora of easier ways to get data out of unsuspecting users.

However, if you’re a cryptographic programmer, especially if you work on special-purpose hardware that’s supposed to be resilient even to expensive and cumbersome attacks, it’s a pertinent reminder.

Algorithmic speed is not as important as algorithmic consistency, because anything that leaves behind a pattern that depends on the current inputs could be used in what’s called a side-channel attack, or a “side door.”

As cryptographers are always keen to remind us, “Plan ahead, because attacks only ever get better.”

9 comments on “Forget iPhone backdoors, here’s a *side* door that can steal your keys”