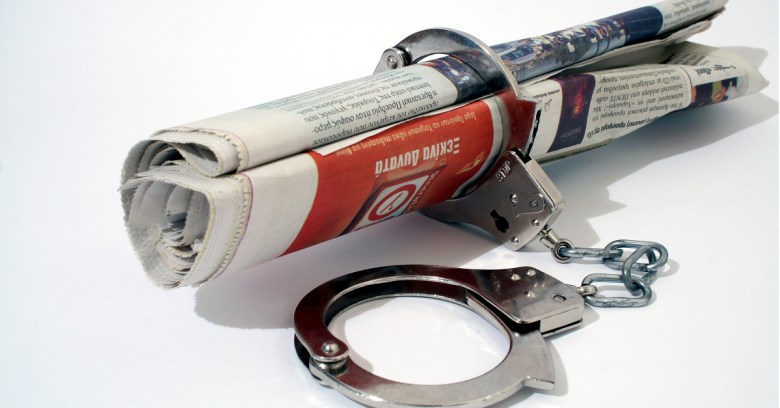 Federal prosecutors want a 5-year jail sentence for Matthew Keys – the journalist convicted of handing over login credentials for the Los Angeles Times’s parent company and then telling Anonymous to “go f**k some s**t up.”

Which they did, though it wasn’t all that asterisk-worthy. Rather, the damage inflicted was more along the lines of gleeful tweaking.

An attacker claiming affiliation with Anonymous ultimately defaced a Los Angles Times news story, changing its headline, byline and sub-headline to include the name “CHIPPY 1337” and tweaking an article to read:

That was in 2010. Keys wasn’t indicted until 2013, at which point he lost his job at Reuters, where he was working as a social media editor.

Keys was found guilty last year on three counts of criminal hacking under the Computer Fraud and Abuse Act (CFAA): the much-reviled law under which late activist Aaron Swartz was prosecuted.

To be convicted under the CFAA, the damage done by Keys’ crime had to exceed $5,000. Prosecutors claimed that Keys caused $929,977 worth of damage to the Tribune Company.

US Attorney Benjamin Wagner at the time of Keys’ conviction said in a press release that, although Keys “did no lasting damage,” he caused the Tribune Company to spend “thousands of dollars protecting its servers.”

Keys’ lawyer, Jay Leiderman, said during the trial that the damages didn’t meet that minimum requirement and claimed the Tribune Company inflated the damages to help the government get a conviction under the CFAA.

Keys has maintained his innocence from the get-go and opined that his conviction was “bullsh*t.”

The defense filed a sentencing memorandum on Wednesday, asking the court to impose no prison time at all or to opt for a “non-custodial sentence.”

The 69-page document defended Keys’ history as a journalist. His defense team had tried to argue that Keys was working undercover so as to report on Anonymous.

In recent years, Matthew’s sacrifices have paid off in the form of impactful journalism that has received national attention.

His stories have encouraged discourse, influenced policy and won the attention and accolades from his peers in the industry, public interest groups and even law enforcement officials.

The attorney pointed out that if the prosecution gets its way in terms of sentencing, Keys will be put away for far longer than others convicted for such crimes:

[Keys] faces a far more severe sentence than any member of Lulzsec served. 60 months, which the Government seeks, would be more than any person engaged in hacking crimes during this period – by about double!

Leiderman also said in the memorandum that the man who actually carried out the attack against the Los Angeles Times, George David Sharpe, aka “Sharpie,” hasn’t been charged, either in the US or in his native UK.

The defense lawyer also pointed to a 1987 incident wherein TV pirates took over Tribune-owned WGN-TV, hijacking its signals for 24 seconds in what became known as the “Max Headroom” pirating incident.

Nobody found the culprit. Keys’ crimes pale compared to such an incident, where public safety could be jeopardized by blocked safety programming, Leiderman wrote:

Unlike hijacking a TV signal, altering the content of one LA Times article did not render the rest of the website inaccessible, posed no immediate or future danger or threat to the public and did not – by the government’s own admission – cause any lasting damage to the computer equipment used to operate the website or the website itself.

Prosecution filed its own sentencing memorandum on Thursday.

A sentence of five years imprisonment reflects Keys’ culpability and places his case appropriately among those of other white-collar criminals who do not accept responsibility for their crimes.

Keys is scheduled to be sentenced on 23 March.

Readers, what do you think: does a punishment of 5 years in prison fit Keys’ crime?

Please let us know what you think in the comments section.

Image of Newspaper in handcuffs courtesy of Shutterstock.com