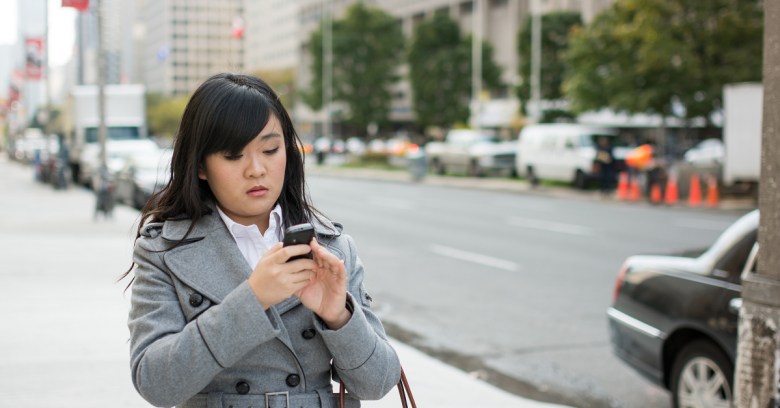 The US state of New Jersey may keep the inattentive amongst us from walking into brick walls or plunging into manholes, daggnabit, even if it has to throw us in jail or fine us to get the point across.

The Associated Press reports that it’s going to do this – in theory, at least – by banning walking while texting.

The potential penalties for violating the ban: fines of up to $50, 15 days imprisonment, or both – the same penalties handed out to jaywalkers.

As one of the majority of people (53%, according to the Pew Research Center) who’s walked into something (I admit: it was a pole) while texting, my mind turns all cartoony at the notion of distracted walking.

Imagine putting a phone into the paws of Wile E. Coyote: he’d be texting the Road Runner about dinner plans all the way down to the inevitable “Splat!” at the bottom of the mesa.

Reality is a lot nastier than that, of course.

And the reality is that pedestrians engrossed in their mobile phones are involved in a growing number of injuries in the US, as studies have shown and as Assemblywoman Lampitt brought up in her discussion with the AP about her bill.

An annual study from the Governors Highway Safety Association found that an estimated 2,368 pedestrians were killed in the first half of 2015: an increase of 10% over the same time period the previous year.

A report from the National Safety Council found that distracted walking incidents involving mobile phones accounted for an estimated 11,101 injuries from 2000 through 2011.

Most people were talking on the phone when they were injured. Twelve percent were texting. Nearly 80% of these pedestrians hurt themselves by falling, and 9% by walking into something.

It’s not like other places haven’t tried to outlaw distracted walking. But so far, bills introduced in states including Arkansas, Illinois, Nevada and New York have all failed.

Thus far, no states have enacted a law specifically targeting distracted bicyclists or pedestrians. [But] a few states continue to introduce legislation every year.

As the AP reports, one bill pending in Hawaii would fine someone $250 for crossing the street while using an electronic device.

Short of outlawing the palm-warmers of the phone-addicted, some places have tried to get creative: Antwerp in Belgium, Utah Valley University, and the Chinese city of Chongqing have all painted lanes on sidewalks for the texting walkers among us.

Other places, such as London, (unfortunately, not my home town of Boston) have tried padded lamp posts to soften seemingly inevitable collisions between distracted pedestrians and inanimate objects.

Idiotic people like me need to be protected, Lampitt said. And London’s approach – that of upholstering the landscape so as to sequester us in padded safety akin to a bouncy castle – isn’t really good enough, given the danger we pose to motorists as well as to ourselves.

Distracted pedestrians, like distracted drivers, present a potential danger to themselves and drivers on the road.

An individual crossing the road distracted by their smartphone presents just as much danger to motorists as someone jaywalking and should be held, at minimum, to the same penalty.

A hearing on the measure hadn’t yet been scheduled as of Monday.

But while we wait to see if the bill passes, I’d just like to say thank you, Assemblywoman, from the 53% of us who’d still likely be better off encased in pillows.

Image of Woman walking and texting courtesy of Shutterstock.com