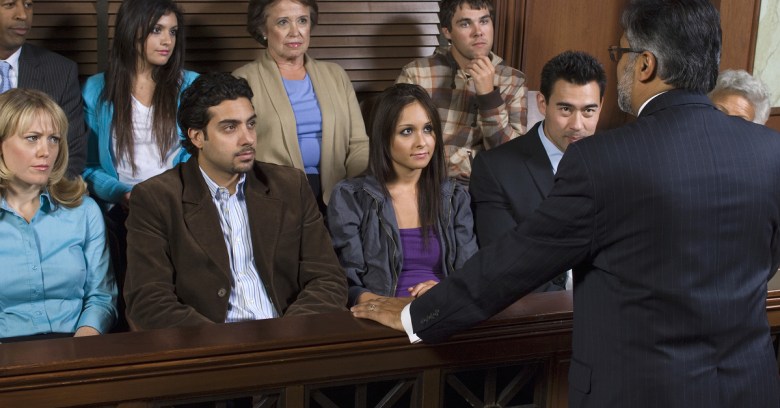 You get a call from the federal court or US Marshals.

Their records show you didn’t show up for jury duty. Scofflaw!

Looks like you’ve got two choices: you can pay the fine, or you can get arrested. They accept payment over the phone or by wire service, thank you very much.

Yikes! Better pay that fine, you well might think, just as you would pay tickets for parking or jaywalking, lest you get a criminal record.

Stop right there. Put away your wallet.

That, actually, is the only legitimate option, because you’re on the phone with a scammer.

The US Court system on Tuesday put out a warning about scams that are “more aggressive and sophisticated” than anything they’ve ever seen, according to Melissa Muir, Director of Administrative Services for the US District Court of Western Washington.

The bottom line, according to the US Courts, is that nobody legitimate is going to call you and demand immediate payment for something like not showing up for jury duty:

A federal court will never threaten an individual or demand the immediate payment – either over the telephone or money wire service – for fines or for not responding to a jury summons.

If this sounds familiar, it should: the jury duty scam is the love child of fake support calls and lockscreen ransomware.

Bogus support calls bludgeon you into paying for crooks to pretend to remove a virus infection that doesn’t exist.

Lockscreen ransomware extorts payment of a pretend fine for a criminal offense you never committed.

The jury duty scams rely on the same pressure that the other scams do: they try to scare you to the point that your judgment jumps out the window.

The details change, but the spook-you factor remains.

So, “Your computer is infected and currently attacking our network with malware! We’re not happy with that, but luckily for both of us, we can help you. For a fee…”

…turns into, “No jury duty? You’re in big trouble, bub, and we’re sending over the US Marshals now! All you have to do to get out of this mess is pay this fine. Visa, MasterCard, wire service?”

And yes, that’s how these call scammers work, preying on law-abiding but not-completely-certain users (which, let’s face it, is most of us) by squeezing them into paying a penalty to make up for some sort of alleged wrongdoing.

A few years ago, we recorded a podcast about how to avoid fake support calls, and by extension any similar sort of high-pressure “pay a penalty, pay it now” call.

If you know anyone who’s been targeted by this sort of scam, please urge them to give the podcast a listen, and help them gain the confidence to hang up at once. (These scammers are notorious for calling over and over again, ramping up the threats, if they don’t succeed right away.)

The calls may well look like they’re coming from perfectly legitimate places if you check out the caller ID numbers.

But bear in mind that there are multiple reasons why a legitimate-looking caller ID might be bogus.

It could be that the origin of the call is being spoofed.

Alternatively, scam calls often come from outide your own country via a VoIP (voice over IP) service and emerge into the telephone network from some local provider, which not only makes the caller seem nearby but also saves the scammers a small fortune in call costs.

The safest thing to do if you get a call like this is to get off the call without further ado:

If ever you think you have to pay a judicial penalty but aren’t sure if you’re being scammed, why not visit your local courthouse or police station and ask how to pay?

If it’s bogus, they’ll soon tell you, and you will kill two birds with one stone: you’ll protect your own money, and you’ll help the next would-be victim by getting the scam on the record.

Image of Jury courtesy of Shutterstock.com

5 comments on “US Federal Court: “you didn’t show up for jury duty” scammers slicker than ever”