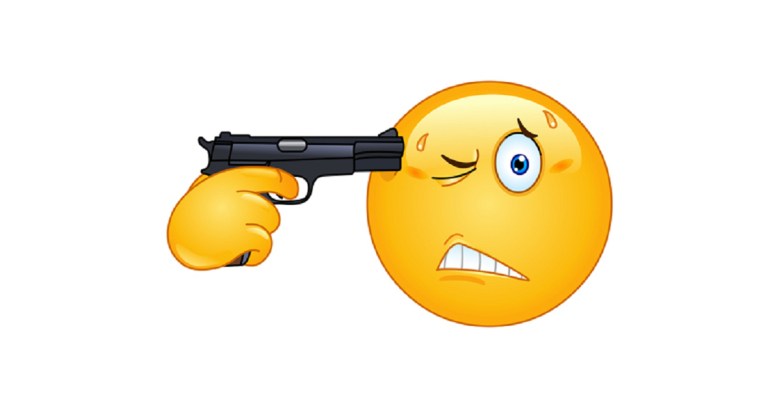 A jilted Frenchman inundated his ex-girlfriend with messages.

That’s not surprising. Jilted people tend to do things like that.

But one of those messages included a gun emoji, and for that, he’s been jailed.

His lawyer had argued that a mere emoji without context could hardly be considered a death threat, but a court disagreed.

Last week, 22-year-old Azougagh Bilal was found guilty and sentenced to six months in jail, with three months suspended, after a judge ruled that the messages could indeed be interpreted as death threats, according to Le Dauphiné Libéré.

On the day of his hearing, the girl’s counsel said that his client had been having nightmares and was too afraid to be out alone in the city due to Bilal’s harassment.

Another newspaper, The Local Europe AB, reports that the sentence could have been far more severe, considering that the maximum sentence for death threats is three years in prison and €45,000 in damages.

What exactly do people mean when they text a gun emoji? 🔫

Like all emojis, it’s dependent on context, of course. An irate ex-boyfriend texting an image of a deadly weapon? That’s certainly cause for concern.

Last year, YouthRadio asked kids what the meaning of the gun emoji is.

One 17-year-old, Savannah Robinson, explained that it can be a metaphor:

‘Oh like my homework is killing me, gun gun gun,’ that means just that your homework’s really hard and like you want to kill yourself – not actually kill yourself.

But now that I’m saying it, like I’ve never said out loud ‘I’m going to kill myself’ – like that just sounds like, ugh. And that’s definitely not what I mean.

But when the gun emoji is dropped into threatening emails, it’s of course considered a threat.

That’s why police in January 2015 arrested a Brooklyn teenager on charges that included making terrorist threats after he posted messages with a police emoji alongside gun emojis.

Sometimes, a cigar is just a cigar.

Other times, a gun emoji is a threat that’s backed up by stark reality.

Image of Emoticon pointing a gun courtesy of Shutterstock.com