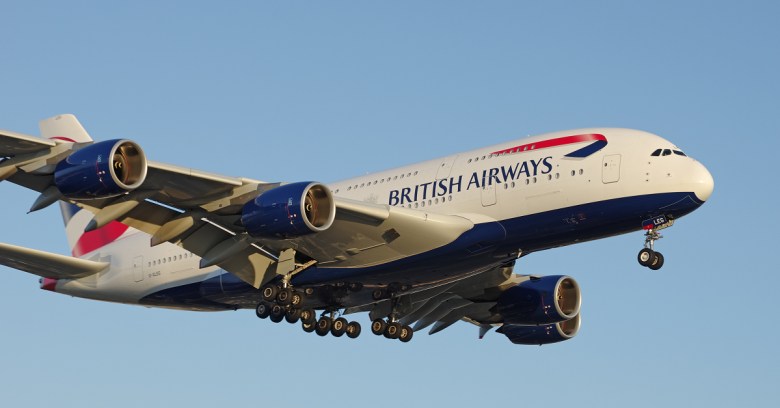 An object believed to be a drone crashed into a British Airways flight from Geneva as it came in for landing at a London airport on Sunday afternoon.

The Airbus A320 landed safely at Heathrow with 132 passengers and five crew on board.

Aviation police have launched an investigation, according to the BBC. Apparently, police haven’t found the drone yet; nor have they made any arrests.

After landing, the pilot said that the object had hit the front of the plane.

This is believed to be the first recorded drone strike of an aircraft in the UK.

To echo Steve Landells, from the British Airline Pilots Association, it was “only a matter of time,” given the increasing number of misbehaving drones endangering UK and US skies and anybody unlucky enough to be underneath the potential juggernauts if they plunge to the ground.

As it is, drone operators who fly their gadgets near an airport can already be punished with up to five years in prison in the UK. Flying above 400 feet or near buildings or crowds is also forbidden.

In the US, the Federal Aviation Adminstration (FAA) recently made registration mandatory for any drones that weigh between 0.55 pounds (250 grams) and less than 55 pounds (approx. 25 kilograms).

The rule came into effect right in time for Christmas, when a slew of people found drones waiting under the tree. At the time, FAA Administrator Michael Huerta said that registration would give officials a chance to educate the new operators so they know the airspace rules before they fly.

Of course, registration – which includes a requirement that a unique identification number be marked on the drone or inside the battery compartment – also enables investigators to track down owners who fly irresponsibly once they’ve picked up whatever’s left of a drone after an accident.

Mandatory geofencing is also an option, though the FAA hasn’t gone that far – yet. In November, two drone manufacturers themselves took the initiatives to keep drones from flying where they shouldn’t, by announcing plans to build technological limits into the units themselves.

Those manufacturers, 3D Robotics and DJI, two of the most popular consumer drone manufacturers, announced geofencing systems with real-time access to no-fly zones provided by AirMap.

How much harm can a drone do?

As it is, we know what happens when a bird gets sucked into a jet engine.

That’s because in the US, the federal government has long required that planes be tested for how well they tolerate these strikes (and yes, that involves testing engines by launching carcasses at them with a chicken gun).

But so far, none of the major jet engine manufacturers has tested for the effect of drone impacts.

Others have, though. Tests done at Virginia Tech’s College of Engineering have shown that drones as small as 8 pounds could have “devastating” effects if sucked into the turbofan engines of commercial aircraft, ripping apart the fan blades of an engine during take-off in less than 1/200th of a second.

It gets worse: according to Robotics Trends, as the drone debris continues to thrash around inside the engine, hitting speeds up to 715 miles per hour, it could cause “catastrophic” engine failure.

There have been a number of serious near-misses between drones and aircraft, as reported by the UK Air Proximity Board.

The BBC recapped the near-misses that predate the midair strike of 17 April:

Beyond flying too close to airplanes, unmanned aerial vehicles (UAVs) have been spotted hovering over playgrounds, hurtling through the skies over London’s Hyde Park, dropping packets of drugs into prison, gawking at a sunbather, following somebody home and then hovering outside their bedroom window, buzzing at 365 meters (1,200 feet) above Liverpool city center, being flown over a house by neighbors tied up in a six-year boundary dispute, lingering above people to apparently record them as they entered their PINs into ATMs, and forcing fire-fighting planes to divert course during California’s brutal, drought-fueled fire season last summer.

In the US, we’ve seen one man arrested for shooting down a drone. That, of course, wasn’t safe, though a judge did consider it legal.

The FAA begs to differ and recently reiterated that it is most certainly not OK to shoot down UAVs.

It is, in fact, a federal crime, and those who grab their artillery when they hear a buzz could be facing up to 20 years in prison if they shoot down a drone.

8 comments on ““Drone” crashes into plane headed for Heathrow landing”