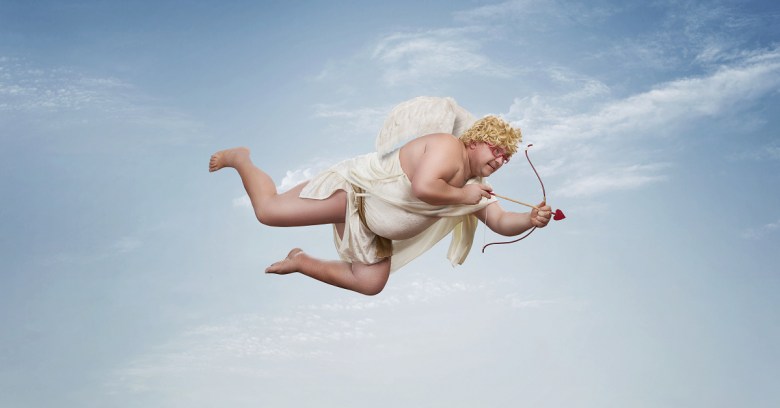 Here’s the story of how to turn online dating into a factory whose output consists of churning out soulmates by the tens of thousands.

It begins with a math scholar named Chris McKinlay. His is not the type of dating strategy that makes you want to scrape him off your shoe, like all those “swipe right on everything” types.

He actually wanted a meaningful relationship, not a string of one-nighters.

Not that he was what you’d think of as your storybook Prince Charming, mind you…

…unless, that is, your idea of Prince Charming is an applied math grad student whose funding ran out and who thus sleeps on a foam pad on top of a desk in his thesis cubicle.

As he tells it in an episode of The Secret Life of Scientists & Engineers, when he wasn’t working with supercomputers, McKinlay spent his spare time on OKCupid.

The free online dating service determines people’s potential compatibility by comparing their answers to specific questions. The more similarly answered questions, the higher the site ranks a couple’s chances of being a good match.

He answered hundreds of questions, to no avail. After a few weeks, his OKCupid inbox held nothing but e-dust. He got 0 messages.

The first thing he noticed was that women in Southern California – he was a grad student at University of California Los Angeles – tended to select questions that clumped up into 7 categories.

Looking at those subsets, McKinlay chose a category that corresponded with the type of woman he’d like to date.

Next, he wrote some code to determine which questions were most important to the type of women he felt drawn to.

Then, McKinlay determined which of those questions he’d feel comfortable answering truthfully.

All of a sudden, he became the top match for over 30,000 women. At the same time, McKinlay became a very popular guy.

I was trending globally on OKCupid.

To figure out how accurately the site’s algorithms match up to real-world people, you just have to go on a lot of dates.

McKinlay figured he’d go on one date per day. On his first date, he left his cubicle, showered at the gym, and met a woman.

The first thing she said to him:

I’ve never seen a 100% match before. Do you think we’re soulmates?

From the get-go, 100% match or no, it was “pretty clear” they weren’t soulmates, McKinlay says. But after 30 dates with 30 women, it also became clear that the idea of a 100% match made quite an impression on the women he dated.

They expected – who can blame them? – that they’d finally found Prince Charming.

They hadn’t. Instead, they’d found Prince “I wrote a bunch of natural language processing software to optimize my profile.”

He fought off their expectations by turning himself into a dating robot, going on what he called “efficient and depersonalized dates,” one after the other.

Then came Date No. 88. She told McKinlay that she’d actually changed her profile for him, given that his profile showed that he didn’t often write back.

It must have worked: he wrote back. She had a vibe that he liked.

This is what McKinlay told her:

I hacked all the match scores and I’ve been going on a date per day and I’m not sure what I’m looking for anymore, but I think you might be cool. You know, is that, like, weird?

She thought about it and said,

No, it’s not weird. That’s kind of what it’s like to be a woman dating on OKCupid. You have a bunch of people writing you, you’re not sure what exactly they see in you, but you kind of have a sense that it’s not what you value in yourself, and how do you manage that?

It was a great first date.

Years later, they got engaged.

Data analyst and journalist Amy Webb did it by creating spreadsheets to track dozens of data points on the alleged “matches” that turned into steaming piles of disaster when they met in person.

Like, say, “Steve, the IT Guy”: a man the algorithm matched her up with because they shared a love of math, gadgets, data, and 80s music. Steve the IT guy took her out to one of Philadelphia’s white-tablecloth, expensive restaurants. Then, he ordered piles of food, and many, many bottles of wine.

Webb’s takeaway: you can’t blame the algorithms. But people do lie when they answer questions put to them by online dating services.

She reverse-engineered the dating sites by using a type of what would be dubbed cyber catfishing if she were up to criminal intent: she created fake profiles of men that matched the type she was after.

Then, she crunched the data on the women who chose to interact with them. Next, she changed her own profile to more closely match those women: more skin showing in more brightly lit photos, more words like “fun” and “family” that showed up as frequently used in their word clouds.

It worked. She married an online date. The couple had one daughter as of 2013.

So if you want to be successful in love and procreation, the message is clear: start crunching the big data. It might sound about as romantic as a spreadsheet, but hey, spreadsheets and natural language processing are starting to look pretty sexy.

Image of Cupid courtesy of Shutterstock.com

9 comments on “How one man became the perfect match for 30,000 women on OKCupid”