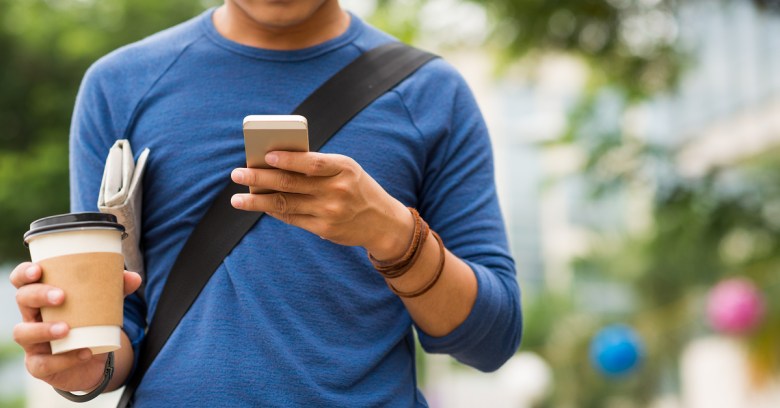 Besides the wish to avoid evolutionary determinism, why should you look up from your mobile phone just because you’re walking in front of oncoming traffic?

You shouldn’t, says the German city of Augsburg. Or, at least, we don’t expect that you will.

That’s why it’s installed traffic lights embedded in sidewalks: flashing red lights that people can’t miss, even if they’re looking down at their phones.

In Germany, they have a word for the walking distracted: they call them smombies, short for smartphone zombies.

A survey conducted in Berlin and several other European countries revealed that nearly 17% of pedestrians use their phone in the middle of road traffic.

“Smombie” is an amusing word to describe those people, but there’s nothing funny about this issue. The survey showed that young people were the most likely to risk getting killed by oncoming traffic by sneaking a peek at WhatsApp and Facebook.

Accident statistics show that around 22% of all people who die in traffic accidents in the European Union are pedestrians. Most of these pedestrians are killed within towns and cities – in Germany, for instance, the proportion is 70%.

The teams who conducted the survey witnessed some harrowing examples:

Those were near-misses, but the German newspaper Süeddeutsche Zeitung noted one fatality that’s resulted from distracted walking: In March, a 15-year-old girl listening to music via earplugs on her phone died after being caught and dragged by a tram.

As the newspaper describes Augsburg’s new pedesrian lights – which the city’s just trialing, at this point – eight LEDs begin to flash red when a tram approaches.

It creates a whole new level of attention.

It’s not the first city to try to keep distracted pedestrians safe.

In the US, the state of New Jersey has been trying to ban what’s called distracted walking.

One bill introduced in Hawaii sought to fine someone $250 for crossing the street while using an electronic device.

Other places have tried to corral the distracted walkers: Antwerp in Belgium, Utah Valley University, and the Chinese city of Chongqing have all painted lanes on sidewalks for texting.

Image of man walking with phone courtesy of Shutterstock.com