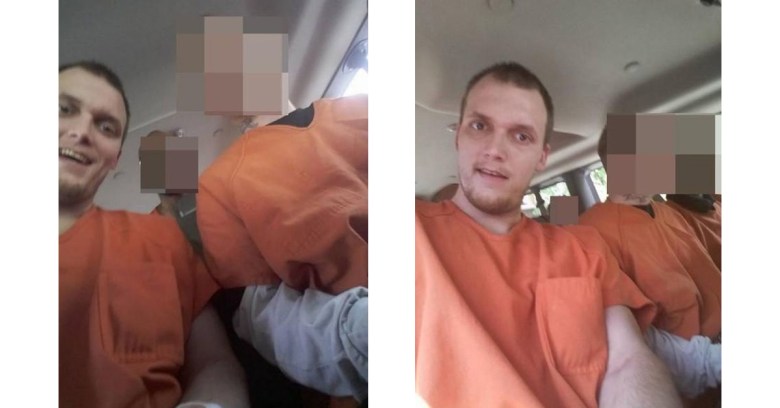 Do you ever wonder about those hapless crooks who selfie themselves straight into prison?

You know the types: the burglars who do things like snap themselves on stolen phones, only to have their mugshot uploaded automatically to the cloud.

Or the guy who, recently released after a 5-year stint for bank robbery, allegedly went and robbed another bank…

…And then chronicled it, uploading a mugshot that featured him with a huge wad of cash stuffed in his maw.

Do these guys ever have “D’oh!” moments? As in, regrets: do you have a few?

Well, here’s the story of a self-incriminating crook who was already in police custody – wearing handcuffs, chains and an orange jump suit, no less – but somehow managed to take smiling selfies with his fellow inmates from inside a police van and post them to Facebook.

He wasn’t taking a selfie while chewing on allegedly stolen money. Nor did he post a Snapchat selfie of himself, armed, posing with a robbery victim.

He didn’t have to: the incriminating part of selfies for prisoners is the mere fact that they exist. Somehow, this prisoner got hold of a contraband device, such as a mobile phone.

Does he regret it? Not much.

I had some family members that seemed concerned about me. I just wanted them to know I was alright – not to stress too much.

He included captions on the photos that said, “On the van,” “Go hard all day,” and “Keep up.” That last one was his way of telling friends and family to keep their heads up while he’s in jail, he told WSAZ:

We just wanted to pose and let our families and loved ones know that we wasn’t doing that bad.

According to WSAZ, Holbrook’s been accused of shooting a man during a robbery in February. Police say he approached a vehicle, pulled a gun on three men, demanded money, and shot one of the men in the thigh.

Holbrook said that he wasn’t thinking about consequences. Rather, he was distracted by what had just gone on in court last week, on Monday, 25 April.

While there for a hearing, his request for home confinement was denied, as was his motion for dismissal.

I guess the state has their reasons for what they do. It is almost election year, too. So I guess they’re trying to be tough on crime.

With thoughts like that in his head, he said that his judgement was cloudy. He didn’t think about the fact that taking selfies could get him or others in trouble.

I was focusing on the negative outcome of court and my caring went out the window about the situation. I wasn’t going to dwell on the negative. I was going to focus on the positive and keep moving forward with this.

Being positive entailed three cheery selfies posted to Facebook over the course of 20 minutes.

His only regret is that he might have gotten somebody else in trouble, he told a reporter:

I regret that somebody may get in trouble.

I know there’s people with jobs and families to feed and if this falls on someone and they lose their job because of this, I’m a feel like a piece of crap for a while. But at the same time, I’m a kid at daycare.

The million dollar question: Where did he get the device that he used to take the photos? When WSAZ asked, Holbrook seems to have developed a bit of amnesia, paired with a touch of politician’s spin on details:

I can say I think it was a cell phone.

Let’s just say I found it. It was within my reach.

As of last week, a judge had called Holbrook a threat to the public and set a $200,000 cash-only bond. An investigation into the selfie incident was ongoing.

It wasn’t clear if Holbrook would face additional charges for the incident.

What is clear is that states are cracking down on prisoners’ access to social media, whether they get there through contraband phones or with the help of friends and family.

Offenders have used social media accounts to sell items over the internet based on the notoriety of their crime, harass victims or victims’ families, and continue their criminal activity.