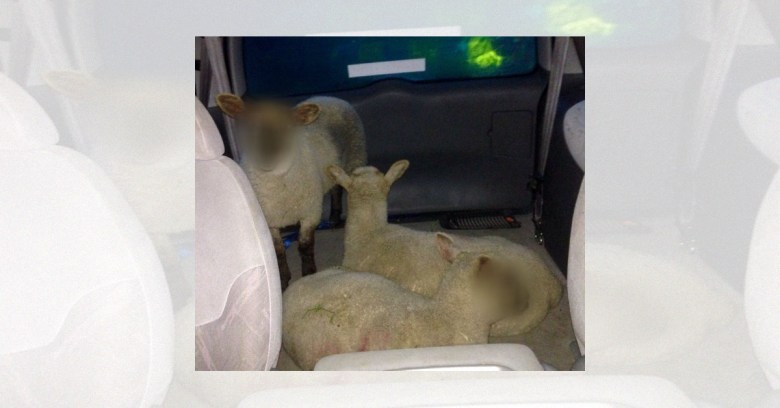 The officers of West Midlands Police take protecting the victims of crime very seriously; especially when they’re no more than a few months old.

So when three men in their twenties were arrested on suspicion of sheep rustling, the force pixellated the faces of the victims – the allegedly rustled lambs – in their press release.

According to the statement, the Romanian men ‘rammed’ into a car in Yardley, UK, while trying to make off with the animals. Police then ‘flocked’ to the scene to arrest the suspects. Their ‘shear’ determination paid off when the men were found and then ‘herded’ into a police van.

My mint sources tell me that an officer in the case blurred the image as a joke. He presumably concluded he had an obligation under the Ewe-ropean Convention on Eweman Rights to hide the poor little lambs’ faces.

The image-blurring may have been tongue-in-cheek, but the crime was actually genuine. The sheep are now being cared for while farmers check their flocks to see if any lambs are missing.

On a more serious note

West Midlands Police acted entirely within guidelines on what information should be released about victims of crime. Under legislation that includes the Data Protection Act and Article 8 of the Human Rights Act, police are required to protect personal information unless there’s a good reason why it should be released.

But it’s not only the police who must protect personal information. Journalists, for example, also have similar guidelines to follow.

One of the group’s newspapers had published a photo of a victim of former England football player Adam Johnson. The court ruled it didn’t go far enough in disguising her identity, with the presiding judge also commenting on the distress caused by social media.

In today’s always-on digital world where information lives forever, there’s no room for being woolly when it comes to privacy.

5 comments on “Ewe must be joking! Police blur lambs’ faces to protect their identity”