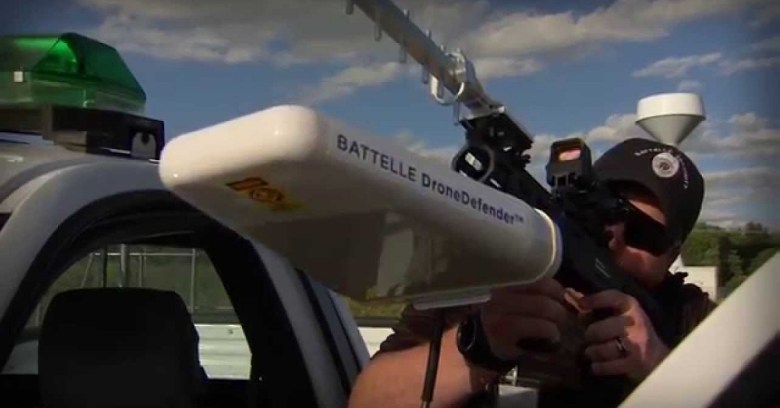 There’s a new drone killer in town: a gadget that looks like the offspring of a futuristic laser rifle that fell in love with a TV antenna from the 1960s.

It works by firing radio frequency hacks that screw with drone commands.

As Ars Technica reported from last week’s Navy League Sea Air Space Exposition in Baltimore, the system, which sparked the most buzz at the expo, is  called DroneDefender.

It was developed by researchers at Battelle, a nonprofit research and development outfit.

The gadget, powered by a battery in a backpack, has two triggers that allow operators to choose how they want to take down a drone: by remote control disruption of command-and-control signals sent by the operator of a drone trespassing in restricted airspace, or by disrupting its automatic guidance system.

We’ve already seen plenty of anti-drone technologies trialed, be it through official R&D channels or by unsanctioned, low-tech means: as in, “Drone’s over the backyard, best go get the shotgun.”

The more official, less birdshottish anti-drone suggestions have included geofencing, sound-blasting drones out of the sky, a NoFlyZone, and mutant ninja killer raptors.

Kidding. They’re not mutant. They are pretty damn ninja, though.

But many of those anti-drone technologies are dangerous.

While it’s easy enough to jam a drone’s radio to force it to autoland or even try catching it in a net shot out by a bigger drone, some drone interception techniques present the danger of having the gadget turn into a meteor as it loses control and plummets toward the ground – and possibly toward people below.

As you can see in Battelle’s video of a simulated DroneDefender takedown of a drone (it’s been successfully demonstrated in the field), DroneDefender doesn’t turn its prey into a plummeting chunk of plastic and metal.

Rather, it captures an errant drone with what looks like The Force (as in, Luke, use the) and allows the DroneDefender user to ever so gently lower it to the ground by slowly lowering the shotgun-like device to guide the drone as it lands.

Another anti-drone tool demonstrated at the show was Dronebuster, which uses broadband jamming, making it illegal to use in the US.

But its maker, Flex Force, is working on a new version that would pass muster with Federal Communications Commission (FCC) regulations.

According to Ars, rather than jamming command and control signals, the upcoming version of Dronebuster would instead exploit weaknesses in drone communications protocols themselves.

That will enable the Dronebuster’s operator to trigger the “fly home” command on some drones and the “land” command on others, according to Ars’s Sean Gallagher – a feat it accomplishes by cycling through command sets for various drone systems.

Federal government customers are already using a version of Dronebuster.

When will we get a chance to get our hands on one? First, it has to get FCC approval. Then, local agencies could get their hands on it. Then, maybe, other customers.