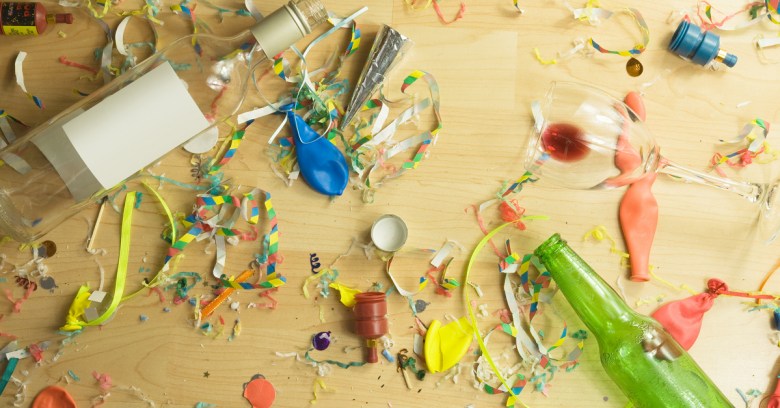 A brother, believed to be 17, and his younger sister barricaded themselves into a bedroom along with some guests in a Melbourne suburb after a Facebook party invitation drew gatecrashers battering down the door to get in.

As reported by local paper The Age, the party, advertised to the friends of the young hosts, started around 6 pm on Saturday.

Their father was on a trip to Queensland for the week.

Neighbors told the newspaper varying numbers for the horde that showed up: a neighbor who identified herself as Lee said it was a crowd of between 100 to 200 youths, nearly all male, between the ages of 14 to 20.

Another neighbor who identified herself as Maddy said that the gatecrashers started to swarm and swirl around in front of the house, until they finally tried to get in around 11:30 pm.

That’s when the younger sister slammed the door on them, Maddy said.

The uninvited youths made a few more tries to get in, then they started punching and kicking at the doors and windows. A waste bin was thrown at a window, and as of Sunday morning, trash was still strewn about the front yard.

The unruly mob armed themselves with pulled-up garden stakes that had been holding up trees in the street.

They were punching and kicking and then they managed to kick in the front door and smashed the front window… there were about 30 or 40 of them. As soon as the front window broke they were like in a frenzy.

According to Victoria Police Superintendent Stuart Bateson, several party guests, including the teenage girl host, barricaded themselves in a bedroom while their home was trashed.

Terrified neighbors locked themselves in their homes and grabbed a cricket bat for protection. Others said that they saw the gatecrashers looting, hauling away TV sets, computers and other valuables.

According to a police report, police who initially responded had to retreat when a group of at least 50 youths charged them.

Additional police were called in for backup, along with a helicopter. Three people were injured and treated at the scene. The home was extensively damaged.

The teen hosts are, understandably and rightfully so, pretty abashed at this point. No reports yet on what Dad said when he heard about his home getting desecrated while he was away.

Of course, this isn’t the only story about parties gone social media-ishly berserk. We’ve also seen:

For you future party hosts who’d prefer a more intimate event, check your invite’s settings before you post it.

Remember, it’s easy for things to spread on social media. Then, it’s all fun and games – until, at least, somebody sets the garden shed on fire or gets chased down the street by a baton-wielding cop.