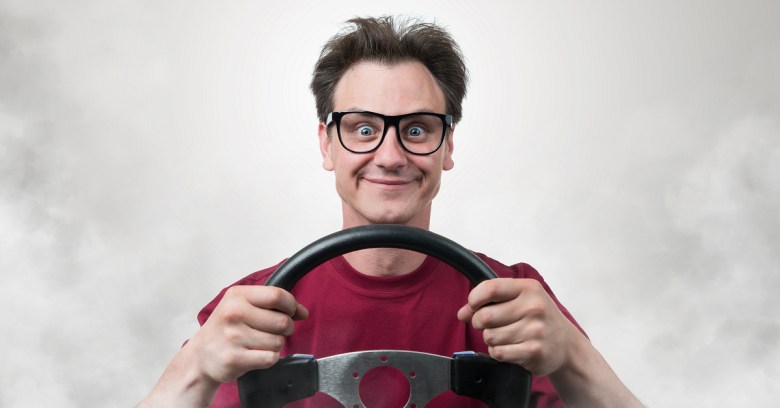 A Texas man has admitted to guessing at what must have been a forehead-slapper of an easy login for a highway sign, changing what should have been a “construction ahead” warning to “Drive Crazy Yall.”

Somebody who lived nearby flagged down an off-duty deputy on Sunday and told him that they’d seen a dogwalker fiddle with a warning about road construction on the electronic message board, according to an arrest affidavit seen by the Austin American-Statesman.

Geoffrey Eltgroth, 26, of Leander, Texas, was walking his dog along a road, about 25 miles north of Austin, on Sunday.

The affidavit said that he admitted to having typed “‘Drive Crazy Yall’” to display on the board. The deputy found Eltgroth walking behind a gas station and confronted him about changing the sign.

According to the affidavit, Eltgroth “admitted to typing in a user name and password (which he guessed) for the sign and to deleting the message to warn traffic of upcoming construction and typing the different message because he believed it was humorous.”

On Sunday, Eltgroth was charged with criminal mischief: tampering with transportation communication equipment. That’s a third-degree felony, punishable by up to 10 years in prison, though maximum sentences are rarely imposed.

Eltgroth was in jail as of Monday.

We’re going to assume that Eltgroth didn’t have sophisticated password-cracking instrumentation wired into a doggie leash, which suggests that the highway sign was protected with one hell of a rubbish password.

True, the dataset appears to be the same one – only much, much bigger – than that from LinkedIn’s 2012 breach. And yes, we already knew that those 4-year-old passwords were bad, given that they were cracked within hours of the 2012 breach.

But even after 4 years, some of those LinkedIn users still hadn’t changed their bad passwords.

And when it comes to highway signage, well, if those electronic signs are anything like baby monitors, home surveillance systems, or any other internet-enabled camera, we know it probably has a default password.

Not that we would ever advise anybody to commit a third-degree felony, mind you, but maybe that sign should have been changed to read “PLEASE CHANGE MY DEFAULT PASSWORD!!”