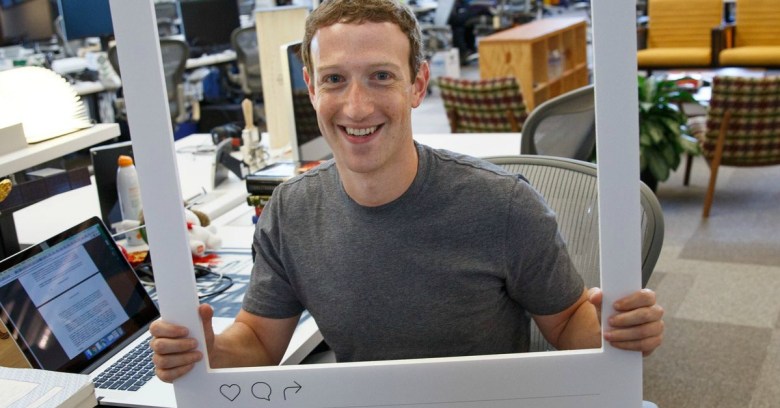 Here’s a riddle: what do Mark Zuckerberg and FBI Director James Comey have in common? I mean, besides the fact that they both run organizations that know waaaaaaaay too much about us?

Answer: they both put tape over their webcams.

You might have seen Naked Security’s writeup of James Comey’s speech at Kenyon College in April, where he argued that “absolute privacy” has never existed in America – until now, when encryption by default creates spaces where law enforcement can not go, even with a court order.

…and where he noted, in a following Q&A with students, that he puts a “piece of tape” over the webcam on his personal laptop.

Well, Facebook co-founder Mark Zuckerberg has just revealed – one assumes inadvertently – that he does the same thing.

In fact, he goes one step further: he apparently tapes his microphone, too.

On Tuesday, Zuckerberg posted a photo of himself holding up a cardboard Instagram post prop in celebration of the Facebook-owned service now being used by more than 500 million people every month.

As the eagle-eyed have pointed out, in the background was a laptop that had a square piece of tape over the built-in camera, as well as a black square over what might be an audio jack, or maybe dual microphones, on an Apple laptop.

3 things about this photo of Zuck:

In fact, it surely hit home for him when his Twitter and Pinterest accounts got hijacked a few weeks ago.

So is the Facebook CEO paranoid? Absolutely. And he’s got cause.

Crooks can use a piece of malicious software called a remote access trojan (RAT) to take over your computer, record your conversations, and yes, to turn on your webcam to spy on you.

Victims have included those preyed on by sextortionists. Miss Teen USA was one of the most famous victims of these slimy creeps: Cassidy Wolf was blackmailed by a crook who used a RAT known as “Blackshades” to take nude pictures of her through her webcam.

How to protect yourself from webcam spies