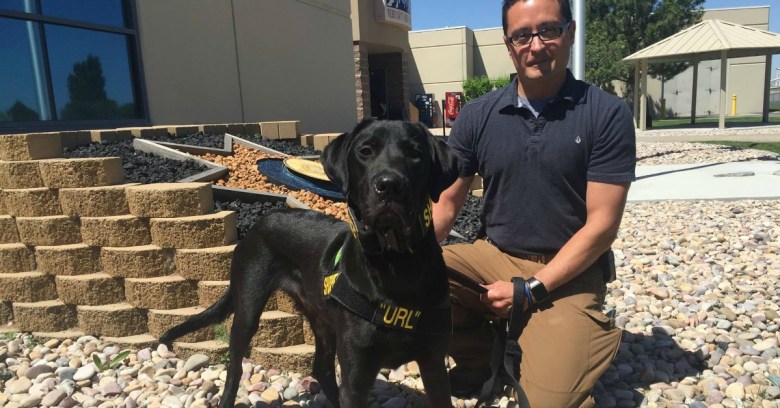 A 16-month old black labrador retriever who was rescued from the pound as a puppy is the latest police dog to start a highly specialized new job: sniffing out hidden electronic devices during police searches.

The dogs’ trainer, Todd Jordan, spent six months training URL on a food-reward system: URL gets a handful of food when he discovers a hidden device at a command of “Seek!”

URL is now working for the Weber County Sheriff’s Office, which said that he’s one of only nine certified electronic detection canines (ED K-9s) in the country, and the only one in the western states of the US.

Two years ago, Rhode Island became the second state in the US to take on the services of an ED K-9. That yellow lab’s name was Thoreau.

These dogs obviously can’t detect what content is on the electronic storage devices, but they’re blood hounds when it comes to discerning certain substances.

Of course, in the case of ED K-9s, it’s not blood they’re searching for: it’s the materials used in the storage devices, such as cellphones, SIM cards, SD cards, external hard drives, thumb drives, iPads or other tablets.

That can include, for example, a thumb drive encased in a tin hidden deep in a metal cabinet, or a hard drive sealed inside a plastic bag on the upper shelf of a desk.

When people don’t want their electronic storage devices found, those are the places they’ll try to hide them. Police say that people also tuck devices behind ceiling tins or stuff them into radios.

Police might miss those spots, but a dog’s sharp nose will uncover such hidden devices.

The sheriff’s office said that URL will help out investigators as they search for hidden memory storage devices, as well as in corrections facilities to seek for contraband such as mobile phones.