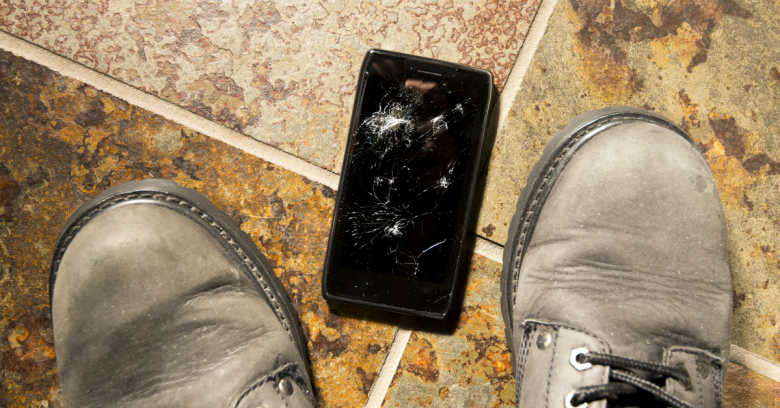 No, a judge declared last week, a burglar who drops his phone as he flees the house has no privacy right that would prevent police from searching the phone to track him down…

…and lead them to find evidence incriminating him in a separate, earlier crime of kidnapping.

The legal argument was about the difference between simply leaving a phone behind (in a pitch-black house that you’ve broken into) vs. abandoning the device.

The device in question – a Samsung Galaxy – was dropped by Matthew Muller, who admitted to the March 2015 burglary of a house in Dublin, California.

Muller’s attorney had tried to argue that police had no right to pick up that phone and dial an emergency number (911) from the lock screen in order to get the phone’s actual number. All investigators had to do was dial 911 – phones allow locked screens to be bypassed for emergency calls – and then ask dispatchers to tell them what phone number made the call.

But when they gained access to the phone, police also came across materials that allegedly implicated Muller in an earlier, separate and utterly bizarre crime: the kidnapping of a couple from Vallejo, California.

How bizarre? This bizarre: The kidnapping, as described in this affidavit, entailed binding the two with zip-ties, putting blackened swimming goggles on them, drugging them, setting up red tape and a video camera so they could monitor the boyfriend, taking the girlfriend off-site to a locked bedroom, instructing the man to send $15,000 in order to get her back, and ultimately releasing her within walking distance of her parents’ home in Southern California two days later (with no ransom having been paid) after the kidnappers became outraged over the police’s statement that they thought the woman made the whole thing up.

Quite the story: it also involved bragging about multi-thousand dollar drones and expertise in handling them in high winds.

Yes, quite the story: exactly the kind of story you’d rather see in a film with a tub of popcorn in your lap, rather than have show up as a real-life tale in which you’re implicated.

And this is where a novel legal argument comes into play.

Muller’s attorney, Tom Johnson, went to court last week, seeking to have all the evidence against his client tossed out.

His rationale, from the motion to suppress evidence:

The entire investigation of Mr. Muller began when a police officer without consent and without a warrant activated the keypad to a phone and began to develop information from that exact moment in time. This search was warrantless, unlawful and all the evidence obtained after the search should be suppressed.

Once they had determined the phone’s actual number by dialing 911, police contacted the carrier, Verizon, to try to determine who the phone belonged to. Verizon wouldn’t give up the details until police came back with a warrant hours later, according to court filings.

It was registered to Muller’s stepfather, which eventually led police to the family’s home, where they seized drones, video cameras and other devices that they claim were part of the kidnapping and, perhaps, the break-in.

Muller’s attorney, Johnson, had dubbed the 911 call an illegal search that violated his client’s Fourth Amendment right to be free from unreasonable searches and seizures.

Muller obviously had an expectation of privacy, given that his phone was locked with a passcode, Johnson argued. Nor did he intentionally leave his phone behind so that police could pry into its contents, he argued.

Rather, Muller just had more important things on his mind. Like, say, getting the hell out of there after one of his burglary victims shouted at his wife to “get the gun” and began to call 911:

If a person has just burglarized a home and the resident is calling 911, the first and most likely reaction is one of flight to avoid arrest. Mr. Muller did not intend to abandon the phone; it was simply left there in the heat of an escape attempt.

Federal prosecutors thought otherwise, arguing in a brief opposing Johnson’s effort to scuttle the evidence that…

The fact that the burglar kept the phone locked with a pass code is of no consequence. Objectively, the burglar had lost that phone forever.

Opening an abandoned container does not infringe any reasonable expectation of privacy.

Prosecutors cited a 1960 US Supreme Court opinion and two more recent federal appellate cases that, they wrote, “firmly established that warrantless searches of abandoned property do not violate the Fourth Amendment.”

Besides, they argued, police didn’t actually unlock the phone to search it; they simply used it to dial 911.

On Thursday, US District Judge Troy L. Nunley refused to dismiss the evidence from the phone, as Muller’s attorney had requested.

According to the Sacramento Bee, Nunley told the court that Muller had no right of privacy for something he left behind in a home he had broken into:

It’s not his house. He had no right to be in the home.

Nunley noted that all police got from the phone before they got a search warrant was a phone number.

Ars Technica has further quotes from the judge:

I don’t think this is a very difficult issue.

Based on everything I’ve heard, the defense can’t reasonably claim that [Muller] didn’t abandon the phone.

He intruded into someone else’s house, commits an act of violence on one of the members of that residence, and leaves his cell phone. … It makes common sense that he wasn’t going back to the house, and even if [he] was, that suggests the exigence that the government was worried about.

It stands to reason that the defense wasn’t going back to the house, and it is well settled that a fleeing criminal has no reasonable expectation of privacy in materials he discards while fleeing.

Maximum sentences are rarely handed out. If they are in Muller’s case, the 39-year-old will face up to life in prison if convicted in the March 2015 abduction. He also faces a potential 11-year sentence in the Dublin break-in.

4 comments on “Burglar who dropped phone has no right to privacy, judge says”