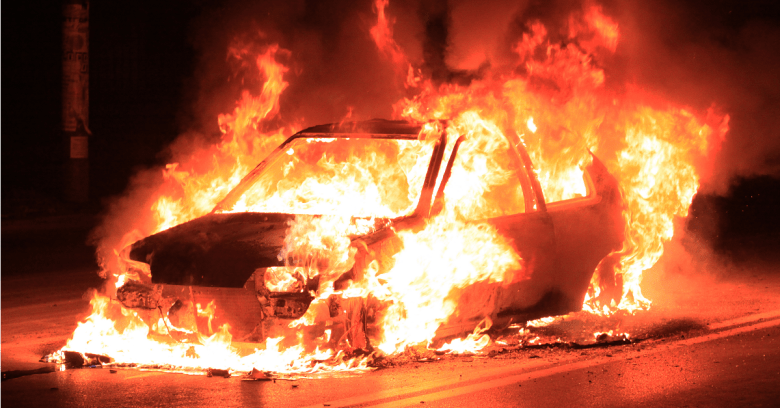 California police have filed a criminal complaint against a man for allegedly setting a Google Street View car on fire because he “felt Google was watching him”.

As it was, somebody had hurled Molotov cocktails at Street View cars on two previous occasions and had shot up a Google building on another.

On 19 May, a Google employee saw a man throw a beer bottle at a Street View car outside his office.

The area around the car burst into flames, and the employee called the emergency number, 911.

Surveillance video showed that the man had lit what were later determined to be two Molotov cocktails.

That car wasn’t destroyed, but a second car was. On 6 June, police responded to a vehicle fire over at another Google building, about a half mile away from the first car bombing.

When they arrived, they found what the affidavit said was determined to be a self-driving Google car, immersed in flame, with broken glass lying nearby.

A spokesman for Google on Monday told the Mercury News that a self-driving car had not, in fact, been involved. Whatever kind of car it was, it was destroyed.

Surveillance video showed a man holding a squirt gun upside down, “presumably to keep the liquid from spilling out,” according to the affidavit.

In spite of the broken glass, police say they didn’t find any evidence of a Molotov cocktail or other incendiary device and believe that the water pistol was used to squirt accelerant.

In between the two arson attacks on cars, there was a shooting. On 4 June, a couple of witnesses loading a van near a Google building heard a series of “popping” sounds – what one of them who’s an “avid hunter” believed were shots from a .22 caliber handgun.

In fact, the hunter said it sounded like somebody had emptied a 10-round magazine.

When police responded, they found five bullet holes in the building’s glass windows.

On the night that they arrested Diaz, who was driving a car that matched the one seen in two of the surveillance videos, police found what looked like a pipe bomb in the car with him.

The bomb squad later told police that it wasn’t loaded, but all it needed was to be filled with something flammable or flash powder.

When they interviewed Diaz, he mentioned Facebook, Google – and its CEO Larry Page – “multiple times,” according to the affidavit.

At one point, Diaz asked for an attorney, but later he changed his mind.

After police re-read his Miranda rights to him, Diaz admitted to the two arsons and shooting up the Google building. He also said he’d been planning to shoot up another building before police stopped him.

Street View cars have been the butt of a lot of jokes. There was the time that a couple of pranksters faked a pick axe murder when they saw one coming around the block, for example.

Ever since Street View cars began rolling, there have been complaints about privacy invasion – despite Google blurring the faces of people captured in its images.

In a 2009 article, the BBC iterated some of the incidents leading up to one of multiple calls to shut down Street View, including:

In fact, soon after the launch of Street View, the human rights watchdog Privacy International sent a formal complaint about the service to the UK Information Commissioner’s Office (ICO). The complaint cited more than 200 reports from members of the public who were identifiable on Street View images, including a man being sick after having a few too many and a picture of a man entering a sex shop in London.