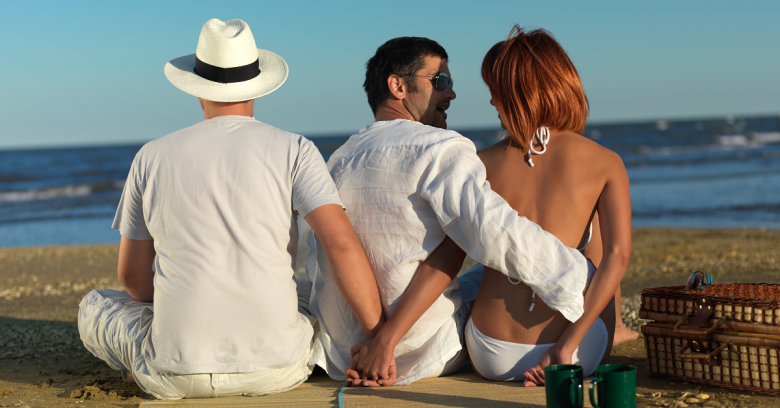 An infidelity informant has outed a woman whom he claims to have overheard laughing about cheating on her partner.

According to the man’s Facebook post, he was standing in line at the coffee machine of a filling station in Chester, England, when he overheard the woman in front of him.

He claims she was talking to a man about how she told “David” that she’d be in a meeting all day at work.

She wasn’t, the shamer said. Instead she was in front of him, laughing about the lie.

At some point, he told The Mirror, even a hotel was brought up in the conversation.

So what did the overhearer do? He climbed aboard his very high horse and shared everything he knew about the woman, in a note publicly posted to the attention of “David”, on Facebook.

David. If your Girlfriend/wife is mid 40’s, went to work this morning wearing a black skirt, black tights and a light blue shirt.. She told you she was in a meeting all day with work. She isn’t, she’s currently stood in front of me at the costa coffee [sic] machine in Chester Shell garage, telling another man this whole story whist [sic] they’re laughing about it. Oh she also drives a black Ford Fiesta with the Reg [redacted]. Pack your stuff and get yourself gone Dave 😁.

As you can see, the man’s exposure of what he assumed was a cheating stranger included a good deal of information about her: her age range, what she was wearing, her car model and color, and even her car’s registration number, which we’ve redacted.

There’s good reason for that redaction: namely, we still have vivid memories of that woman who “outed” a guy for supposedly taking photos of her kids but who was in reality taking a goofy selfie in front of a Darth Vader cut-out.

In that case, by the time the woman’s post had been shared 20,000 times, the Australian man had received death threats and was considering his legal options.

After he came forward and told police the real story, the tables turned, and the mob turned on the woman who had posted allegations about the man.

In this case, the shamer’s post about the supposedly cheating woman went up on Wednesday. By Friday, 23,000 people had reacted to it.

It had been shared 8,478 times and had garnered 2,131 comments, some of which had some choice words for the poster. “Metrosexual grass” stands out. The meaning isn’t clear, but the poster explained that, no surprise here, it wasn’t complimentary.

However, far more people were cheering his action. One poster dubbed him the unofficial king of Brazil, and he posted on Facebook about being interviewed for many articles and multiple radio shows.

As of Monday, neither the allegedly cheating woman nor “David” had stepped forward.

At Naked Security, we regularly report on social media posts, like this one, that instigate vigilantism.

The targets are often hard, or impossible, to sympathize with: paedophiles whose street addresses are publicly posted on Facebook, for example, or groups that foment violent racism and hatred, such as when Anonymous e-hijacked Twitter accounts and websites of the white supremacist group Ku Klux Klan (KKK).

Those are just a few examples but instances of mob justice are legion.

Still the Melbourne man is a clear example of why we should restrain ourselves from prejudging via social media, or of fomenting vigilantism, and should instead trust the law to investigate and mete out justice, as the local police requested in Melbourne regarding the Darth Vader case.

And it’s a very good example of why posting details – including a vehicle registration number – that can lead vigilantes straight to somebody is irresponsible.

Was the woman in line at the coffee shop guilty of infidelity?

It doesn’t matter. It’s not an issue that should concern strangers.

And it’s no excuse to make somebody vulnerable to persecution, be it online or in real life.