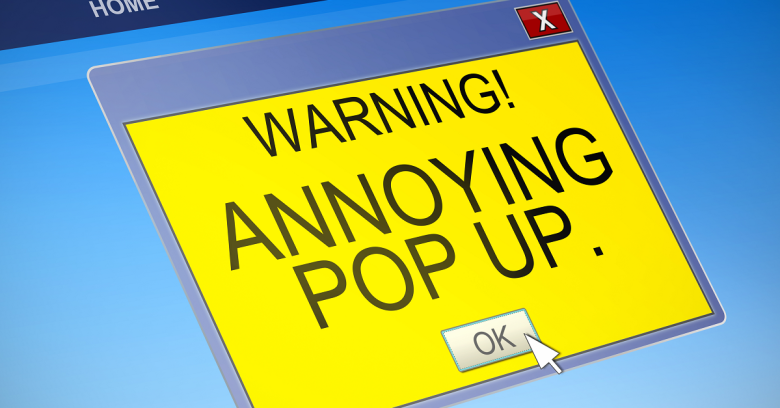 Annoying pop-up ads that get in the way of content are going to be the new lead balloons: Google’s planning to penalize mobile sites that use them by placing those sites lower in its rankings.

In the web vernacular, interstitials/pop-ups are now a ranking signal for SEO (Search Engine Optimization). Similar to how Google in 2014 decided to push the web into being encrypted by using HTTPS as a ranking signal, this move could be an inflection point for how mobile sites go about advertising.

Google said on its Webmaster Central blog on Tuesday that the majority of pages nowadays have text and content on the page that you can read without zooming.

But the company says it’s recently seen many examples of pages showing intrusive interstitials – as in, the content’s there on the page, and it’s available for Google to index, but you can’t see it because it’s covered up.

Users who are forced to very carefully click on the teensy-weensy “x” to get rid of the things, without accidentally clicking on the ad and opening whatever Pandora’s box that entails, don’t like these things, to say the least:

This can frustrate users because they are unable to easily access the content that they were expecting when they tapped on the search result.

In order to make life easier for mobile users, after 10 January 2017, Google’s going to start taking that hide-the-content tactic into account in its page rankings.

Google does not consider all interstitials to be bad news, however.

Besides the signal that a site is using interstitials, Google relies on “hundreds of signals” to come up with search result rankings, it reminds us.

That means that sites that have great, relevant content will still likely appear at the top of search results, and they likely won’t feel much pressure to remove such ads.

But taking these types of user-annoying techniques into account could mean the difference when it comes to two sites that appear roughly equal in ranking.

Google has been increasingly working to direct users not just to the best sites, but to those that don’t irk them.

Two years ago, it started to label sites as mobile-friendly, so that users could find pages where they didn’t have to zoom to read text and content.

Since then, Google says 85% of all pages that come up in search results meet the criteria and display the mobile-friendly label.

That label’s actually going away: it is, after all, another piece of flotsam cluttering up our tiny screens.

Google’s algorithms will continue to take into account whether a site is mobile-friendly, but it won’t be labeling sites as such.