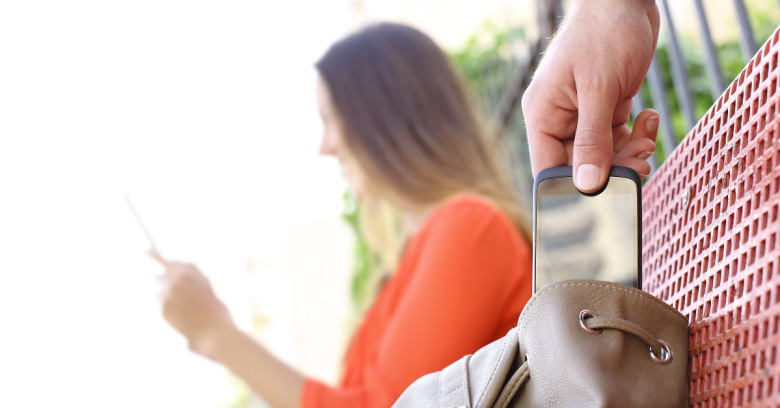 Apple may be working on anti-theft technology to protect iPhones that would covertly snap a photo of (what the device assumes is potentially) the thief, capture their fingerprint, shoot some video and/or record audio.

The company has filed a patent application, published on Thursday, that describes the proposed system.

The application says that a “trigger condition” would result in the capture of the biometrics data: say, if the device were to detect potentially unauthorized use, including fiddling with security.

As it is, there are third-party apps that automatically take photos of people who try to unlock our devices, but they’re aftermarket add-ins.

One example: back in 2012, a woman tried to unlock a stolen iPhone and unwittingly took her own photo.

An app on the phone called iGotYa then automatically sent the photo to the owner, who called the police.

Did the woman who tried to unlock the phone actually steal it, or did she unwittingly buy a stolen phone from the real thief?

That second scenario is what happened when an Australian woman lost her phone while on vacation at the beach last year.

Its new owner accidentally posted a selfie onto her Facebook page. She assumed he was the thief, but after labeling him as such, he reached out to her to say he’d bought it from a third party and had no idea it was stolen. He then returned it to her.

In other words, just because your iPhone snaps a photo or captures fingerprints doesn’t mean that its target is a crook.

If Apple does develop its biometrics-capturing technology, it’s possible that a lot of iPhone owners will wind up with a vast collection of selfies depicting their happy, drooly toddlers, and Apple will wind up storing a whole heck of a lot of innocent people’s biometrics.

The computing device may then provide the stored biometric information for identification of one or more unauthorized users.

Nick Statt, writing for The Verge, pointed out a few technical hurdles.

One such is that currently, Apple’s TouchID fingerprint-technology requires users to hold down their finger numerous times in a variety of different angles to accurately capture the print.

How likely is it that a thief would be so obliging as to inadvertently press their thumb on the home button, multiple times?

Perhaps Apple will refine TouchID so that it can capture fingerprints more efficiently, Statt suggests.

Using the forward-facing camera to snap photos, videos and/or audio would be a more likely scenario. In fact, iGotYa and similar apps go this route, capturing images when they detect that somebody’s fiddling with security settings.

Underlying all of these possibilities is the notion that an Apple device could be turned into a covert surveillance tool.

From battling the Feds over unlocking criminals’ devices to declaring that “we’re not like the others” when it comes to profiteering off of people’s privacy, Apple has worked overtime to position itself as a privacy champion.

Could the company potentially undermine all that work by turning devices into spying tools?

As it is, phone owners in the US only recently got the option to disable tracking and anti-theft tools if they so desire.

That was a win for those who live in the US and don’t like the idea that their phone’s being tracked.

If you want to be a smarter smartphone user, check out our 10 tips for securing your smartphone.