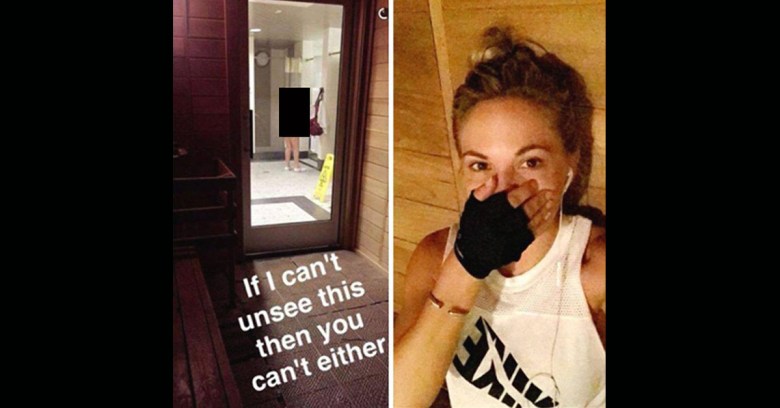 Los Angeles police have found the woman who was photographed while nude as she changed clothes in a Los Angeles gym and then body-shamed by Playboy model Dani Mathers.

According to TMZ, the woman, who’s in her 70s, wants Mathers to be punished and is “more than willing” to testify and cooperate in any way possible to bring her to justice.

Mathers, 29, photographed the nude woman at an LA Fitness gym in Los Angeles and posted it to Snapchat in July with this caption:

If I can’t unsee this then you can’t either.

Next, Mathers posted a photo of herself, laughing and covering her mouth.

The 2015 Playboy Playmate of the Year was roundly criticized for publicly sharing the picture and body-shaming the targeted woman.

Mathers apologized for her actions and then disappeared from Twitter with this note:

I’m sorry for what I did… I need to take some time to myself now to reflect on why I did this horrible thing. Goodnight.

She also deleted the body-shaming post from Snapchat, switched some of her other social media accounts to private, and explained, in a video posted to Snapchat, that her misstep was an accident:

I just wanted to acknowledge a photo I accidentally posted here on Snapchat earlier today and let you know… that was absolutely wrong and not what I meant to do.

I know that body-shaming is wrong. That is not the type of person I am.

The LAPD asked the body-shamed woman to come forward, seeing as they couldn’t continue their investigation without her, according to the Daily News.

Her behavior is appalling & puts members @ risk. We ended membership & she can’t use any club. It’s not just our rule, it’s common decency.

Mathers was also suspended from her job at a local radio program, TMZ reported.

The Office of Los Angeles City Attorney Mike Feuer told ABC News on Monday that it’s mulling whether to press charges, as the LAPD has urged:

We did receive the case from the LAPD. It’s currently under review from our office. We will be making a final decision soon, but there’s no timetable at this point.

Dissemination of a private image is a misdemeanor charge. If the LA city attorney decides to prosecute, Mathers could be facing a maximum jail sentence of 6 months.