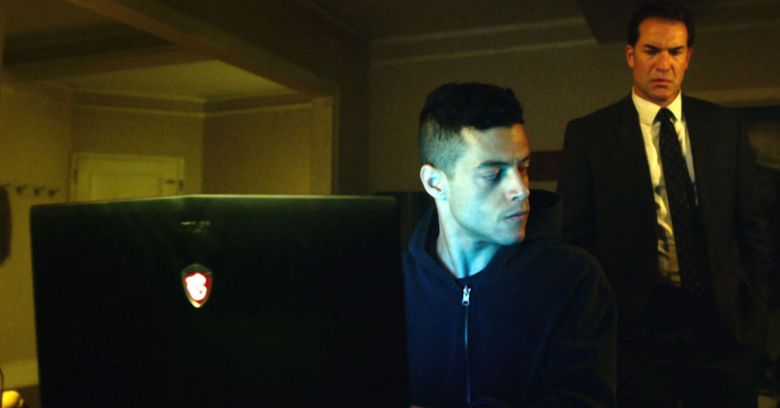 As always, I want to thank our commenters on this series who offer up their feedback and valuable corrections! In a series as (purposely) disjointed and fast-paced as this one, I can miss or misinterpret details as well as anyone else, so your comments are always very welcome and appreciated.

Let’s dive on in to this intense episode. Spoilers ahoy!

Since all the tech in Elliot’s apartment was confiscated, he restocks on some much-needed gear to help him track the phone calls from “Tyrell” (or whoever it really is). We see him load up on some obvious gear, like burner phones, ethernet cables and…a can of Pringles potato chips?

He wasn’t after a midnight snack though. As he loads up Kali Linux on his new laptop (a required first step for any dyed-in-the-wool hacker), we see Elliot making a “high-powered antenna” with the Pringles can. His goal is to take a look at all the Wi-Fi networks in the neighborhood and find one that’s unsecured. It’s cheaper than buying his own router, and with his ‘cantenna’ he arguably has a wider-than-normal range of Wi-Fi networks to scan.

It was fun to see this hack in action and, while Elliot made it look a smidgen simpler than it really is, it’s not that hard to do. (The steps are here, if you’d like to give it a try yourself.)

The cantenna is a really neat bit of DIY ingenuity, but for me there’s a bigger question from this whole scene: Who the heck still has open, unsecured Wi-Fi in this day and age, especially in a city as population-dense as New York?

Unless the Wi-Fi owner feels they want to provide it as a public service, it seems like an invitation for lots of headaches. Someone left the door wide open for Elliot here, but of course for the sake of plot, we’re grateful.

Technology often only gets you so far. Even after the fantastic haul he brought in from Microcenter, the final step in tracking down the location of the mystery cell phone was a series of calls to phone carriers.

Yet again, we see social engineering come in to play as Elliot pretends to be a cop – complete with fake badge number – who’s just faxed an urgent “Exigent Circumstances” report to the cell carriers. He persuades them to send him GPS coordinates which conveniently pinpoint him to an exact location. (We have TV Magic to thank for that level of detail: Elliot says the ping is correct to a radius of about 12 meters, which seems conveniently precise.)

A quick search shows that finding these exigent circumstances forms is trivial, and they don’t ask for a whole lot of information. Many hacks aren’t necessarily technically impressive, but are a matter of knowing what pieces of information to put together, and this is a great example of one.

As a side note, I can’t help but wonder if this episode of Mr. Robot may end up propagating changes in the cell phone industry to make these requests a bit more difficult to fake.

“We need to stop at Microcenter.” For those of us in the geek set in the United States, we knew why Elliot needed to make a stop here as soon as he mentioned it. If you’re not familiar with this chain, it’s the brick-and-mortar place to visit if you ever want to build your own computer or just want to do your techy shopping in person instead of online.

Mr. Robot is often praised for its attention to detail on the hacking side of things, and this cameo from a beloved DIY electronics chain was a nice touch.

Just two more episodes left in this season. We’ve seen increasing mentions of cryptocurrency in each episode, possibly we’ll see “Ecoin” take center stage in the finale? That’s just my guess, but the last few episodes have been quite a surprise.

How do you think this season will end? Let us know in the comments!