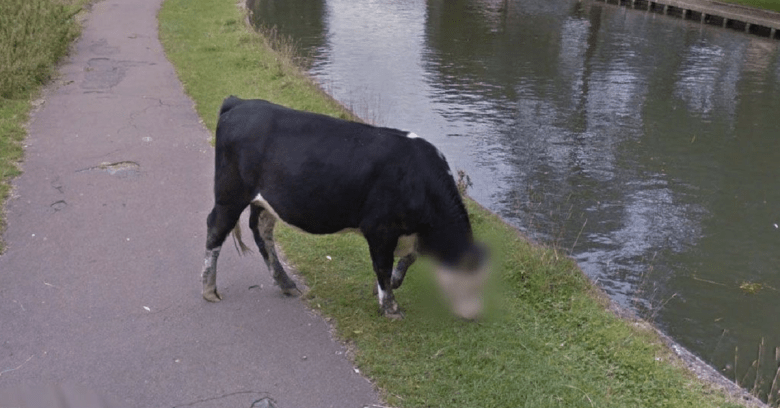 See this cow? … or, to be more precise, this bullock*?

Are you thinking what I’m thinking?

Well, Google’s obviously on the side of shirking bovine, having blurred the bullock’s face in order to keep its udderly unsavory life private.

We’ve also seen Google scrupulously protecting the privacy of its Street View images of the face of the Sphinx in front of the Luxor casino in Las Vegas.

Then too, Google has censored Thomas the Tank Engine’s face.

It’s also protected the face of a pickaxe murderer. Or, at least, it blurred the face of pranksters who set up a scenario of head-massage-via-pickaxe when they saw the Street View car coming.

But ruminants? This is the first we’ve heard of Google caring about their privacy.

The Guardian reports that the picture was taken last summer at a semi-rural meadowland area known as Coe Fen, which lies to the east of the River Cam in the south of the city of Cambridge, England.

The Street View image was spotted last week by the Guardian’s US opinion editor, David Shariatmadari.

The bullock’s face can clearly be seen as it grazes near the river River Cam on an image taken slightly further away, but Google seems to have blurred it for a close-up view.

It needed to disguise its identity! It had a restraining order against the Burger King

I wonder whose face provided the baseline for that match?

You’re milking this one

A spokesman for Google smooshed a few of those and some of his own groaners into this hamburger patty of a comment for the BBC:

We thought you were pulling the udder one when we herd the moos, but it’s clear that our automatic face-blurring technology has been a little overzealous.

Of course, we don’t begrudge this cow milking its five minutes of fame.

*After what were probably thousands of letters from cattle-sexers across the UK, the BBC changed its story to reflect the fact that what we all thought was a cow was actually a bullock, which is a bull who’s had another bit blurred besides his face.