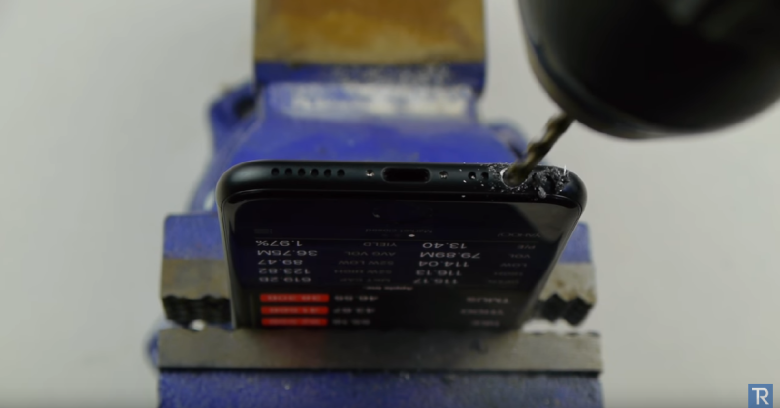 Miffed that you don’t have a headphone jack on your new iPhone 7?

Don’t want to use the adapter that comes in the box?

First, you get a drill with a 3.5mm bit. Then, you clamp your phone into a vise. Next, you…

GO LOCK YOURSELF IN A CLOSET UNTIL YOU COME TO YOUR SENSES!!!!

Please promise not to drill a hole into your $649 palm warmer, as the jokester “TechRax” advises you to do – and at least apparently does – to some hapless, screen freaking-out, panicky iPhone in this video:

That video had over 10 million views as of Monday morning, along with over 30,000 comments.

That would be fine were the comment section only full of contributions from people who got the (very expensive for those who fall for it) joke.

But no, there are, of course, a selection of comments from the very alarmed, newly wiser, and suddenly phoneless, including:

I tried this and ended up with display destruction and it not working… I really committed the biggest mistake of my life by watching this video.

Yes, you did. You’ve been victimized by a very cruel joke. But you’re not alone.

A friend of mine told me it worked for him, but my iPhone won’t turn on after I drilled the hole for the jack.

I checked and it was the 3.5mm drill, so I made no mistake there! What happened? Any of you have the same problem?

Another commenter, thankfully, didn’t have a vise and hopefully learned his lesson before he went out and got one:

Ok I am sure it’s in the comments somewhere but my friend told me to ask what size drill bit am I supposed to use?

Also I don’t have that clamp thingy, can I or my friend hold it while we drill? I don’t want to ruin my phone.

Thanks for all the help guys…

Of course, all these “oh woe is me” purportedly hole-drilling commenters themselves could be, in the words of the ever-wise Gollum, sneaky little Hobbitses, wicked, tricksy, false!

A lot of commenters are also stretching out the joke, and compounding the meanness of it, by pretending this “hack” – more accurately known as “device murder” – actually works.

Since some people are still having issues, a bit of advice. The guy seems to have missed the part about cleaning the phone after drilling.

In order to clean out the 3.5mm socket of debris from the drill you need to soak the phone in soapy water for around 15 minutes so all the drill shavings are loosened.

Then give the phone a shake once you’re done. Hope this helps someone 🙂

Or this guy, who added a fictional tech explanation with words like “internal components” sprinkled in there to give him the cred he so doesn’t deserve:

THIS WORKS. The reason this works is because the iPhone 7 actually has the internal components of the headphone jack (the contacts) built inside. Apple only removed the outer part of the jack for cosmetic reasons. There are reports of people damaging their phones, which means they did it wrong. You have to use the correct size drill bit and you have to drill in exactly the location TechRax shows in the video to avoid damaging the jack inside the phone.

There’s obviously very good reason why Google recently asked for volunteers to help it drain the persistent swamp of toxic comments on YouTube.

Since it first came onto the scene, the iPhone has been the subject of tons of hilarious – and/or nasty – pranks.

Now is as good a time as any to remind people that no, you can’t charge your iPhone in the microwave.

Updating to iOS 7 wouldn’t have waterproofed your iPhone, no matter what an extremely convincing looking ad said in 2013.

Bending your iPhone might have well been possible, but was it advisable?

Want to listen to your new iPhone with your beloved earbuds?

There’s an adapter in the box with iPhone 7 and 7 Plus. It’s free, in other words. If you lose it, you can buy another for $9.

Just put down the drill, and back away, nice and slow…

And please don’t encourage others to do any hole drilling!

25 comments on “Don’t drill a headphone jack hole into your iPhone 7! It’s a hoax”