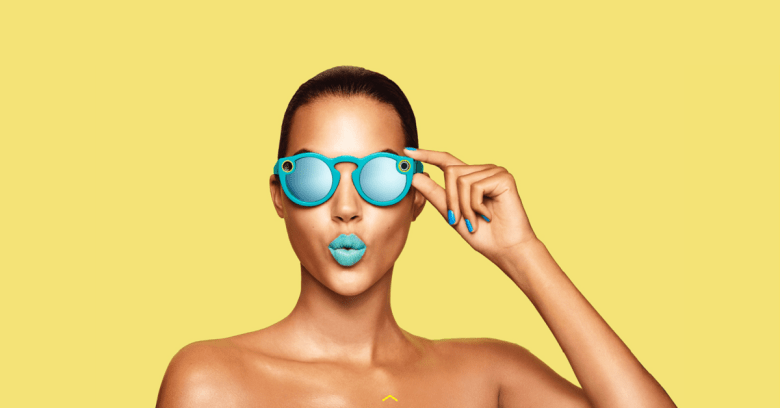 You know how Snapchat’s icon is a little ghost, yes?

Well, it could be on track to become the ghost of Google Glass Past (which was pronounced dead in January).

On its news pages, the company – which is now called “Snap Inc” – announced that it has gotten into the hardware gig by gluing a video camera onto sunglasses so you can take 10-second videos.

The gadget is the first from the formerly apps-only company, which currently commands the attention of 41% of all 18-to-34-year-olds in the United States on any given day.

Oh, excuse me: it’s not the only hardware product.

As the Verge notes, the so-called “Spectacles” joins a list of hard goods previously released by the company: an official ghost-shaped ice tray, a ghost-shaped backpack, a set of playing cards, a stuffed ghost, and a beach towel.

But it is the first hardware product from Snapchat/Snap that’s internet-enabled.

The 10-second videos aren’t ephemeral. According to the Verge, they’ll be saved to a user’s Snapchat Memories.

You tap a button on the top left-hand corner of the sunglasses to begin recording a snap. It will automatically stop recording after 10 seconds, but you can tap it again for additional recording, for a total of 30 seconds at a time.

How will people know a Snapper is recording them? … perhaps surreptitiously? …which earned suspicion and ire for Glass aficionados?

Well, that was a good move. Somebody at Snapchat must have been paying attention to the “Are you recording me?!” barfight, the restaurant that posted the “No Google Glass” sign (and got vilified by Glass wearers on Yelp for it), and the other restaurant where the staff asked a guy to take off his Glass.

We don’t know when they’ll be available outside of sometime this autumn, but we do know that at $129.99, Spectacles will cost about a tenth the price of Google Glass.

The snap videos can be transferred over Wi-Fi to Android devices. The default on iOS devices will be to transfer to the device via Bluetooth connection, or users will have the option of choosing to transfer at a higher resolution over Wi-Fi.

Spectacles will also function as a standalone device. If users don’t have their phones, Spectacles will store the footage until they get back to them.

I haven’t come across details about whether or how the devices will be secured, so it’s unclear whether any random stranger might be able to get at stored videos if they find or steal Spectacles.

.@naval Snapchat did full circle from complete privacy w/ self destroing messages to complete surveillance w/out prior concent w/ Spectacles

The fact that they’ll be transmitting content over wireless also brings to mind the potential for Wi-Fi (in)security.

The devices will be offered in limited quantities, at least to begin with.

From what’s been reported so far, Spectacles doesn’t seem all that much different from wearable video cameras that are out there already, including Go Pro.

So if you can get your hands on a pair, would you? Would you let your kid get Spectacles?

Let us know your thoughts below. And if you need something to mull over as you contemplate this particular type of wearable video camera, here’s a Busting wireless security myths video:

3 comments on “Are Snap(chat)’s Spectacles the new Google Glass?”