According to all-things-Apple commentator Jim Dalrymple, the Cupertino company is about to follow in Microsoft’s footsteps…

…by “pre-downloading” the latest version of the company’s Mac operating system, macOS 10.12 Sierra, in the background.

The idea is to make it more appealing to upgrade, because you won’t have a 5GB download to wait for first before you can kick off the installation.

The latest version is the first Mac operating system in the Version 10 series that isn’t called OS X.

Apple changed the name to macOS, following the orthographic style of its mobile platform iOS, a literal and figurative reminder that Apple’s Mac and iDevice environments are much more similar (and getting ever closer) than they are different.

The “pre-download” process is a bit like airlines and baggage handling: if your flight arrives at a gate really close to the baggage hall, don’t be surprised to find your luggage coming out on a carousel that’s right at the far end of the reclaim area.

The theory is that the time you spend walking to the furthest carousel doesn’t feel like waiting.

On the psychological principle of “a watched pot boileth not,” it ultimately feels as though your luggage came out more quickly, even though it didn’t.

As we all no doubt remember, Microsoft tried something similar with Windows 10, and then kept fiddling with the “pre-download” formula.

As you can see from many of the comments on the numerous Naked Security articles we wrote on Microsoft’s upgrade saga, the overall outcome was not a positive one:

A minority of people with restricted internet data plans complained that the large, unannounced background update burned through an unacceptably large portion of their monthly allowance.

(A few people said they were happy, however: they wouldn’t have initiated the download themselves, but once the free upgrade was ready and waiting, they figured, “Cool! Why not?”)

After a few months, Microsoft went one step further, classifying the pre-downloaded upgrade as a “recommended update,” and popping up a dialog to tell you that it would be installed automatically unless you intervened:

At the time, many users claimed that the dialog invited you to assume that clicking the [Close] button in the top right of the window would cancel the upgrade, and were shocked to find it didn’t.

We disagreed, albeit only modestly. We thought the dialog could have been better designed visually, but we couldn’t help noticing the words “Click here to change upgrade schedule or cancel [the] upgrade,” so we recommended reading dialogs before dismissing them.

Microsoft made two changes to the upgrade dialog, eventually ending with a full-screen purple box that was certainly in-your-face, but could hardly be faulted for technical clarity:

Apple, it seems, is currently only at the pre-download stage, so you aren’t being forced to install the macOS 10.12 update, for all that we strongly recommend it for its security fixes alone.

Nevertheless, we can’t help but be reminded of Apple’s “foisted music” episode, at the time of the iPhone 6 launch, when Apple automatically gave iTunes users a free copy of a U2 album called – ironically, as it turned out – Songs of Innocence.

In the U2 fiasco, which prompted an apology from front-man Bono, it wasn’t the free music that offended people, but the fact that it was automatically clocked up as a purchase on iTunes, as though you’d actively chosen to buy it rather than passively received it. 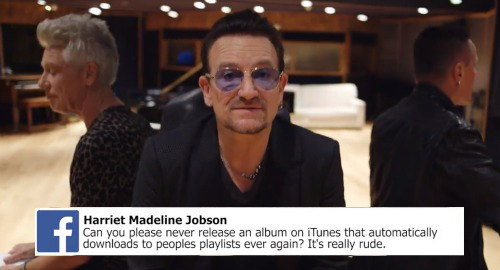 Oops…I’m sorry about that. I had this beautiful idea. Might have gotten carried away with ourselves.

If you can’t spare 5GB of disk space, or you don’t want to download the Install macOS Sierra application until a time of your own choosing, you can head to Apple menu | System Preferences | App Store and decide how much control you want to give Apple over the update process.

If you do turn off automatic updates altogether, however, be careful: you will need the discipline to check by hand from time to time, using Apple Menu | About This Mac | Software Update....

If you’re a Mac fan, tell us what you think of this step.

Will Apple users generally be happy with this “pre-download” process, in a way that their Windows counterparts weren’t?