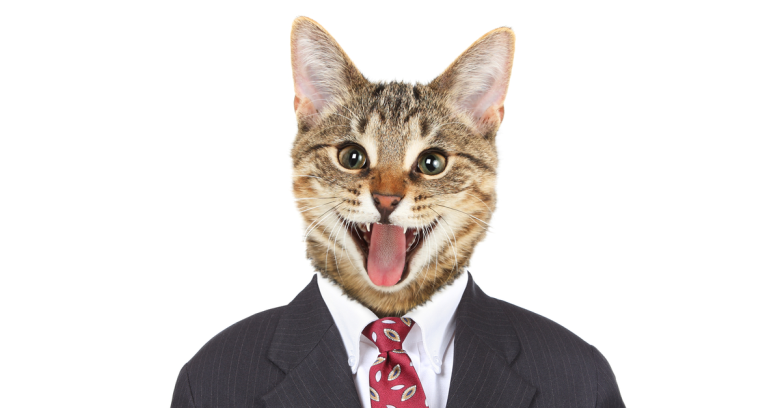 Besides featuring attire that might be worn by a lawyer, is there anything offensive about the above cat picture?

Because posting that sucker on Facebook was getting people banned faster than you can say “Save us: somebody posted an image of a naked breast showing a nipple!!!”

Facebook fixed whatever glitch was going on, but as RT reports, before it did, it had pulled this sourpuss swat-your-account move on an unknown number of people.

Techzei confirmed the bug, which it said was getting people in trouble when they sent the cat meme via private messaging.

Techzei also said that it had confirmed the shutdowns of 7 other accounts.

One of those punished for publishing the nattily dressed cat was Varun Krish, who wrote about it on FoneArena.

Krish’s account of how the internet momentarily went from cat saturation to scratching off its cyber kitty fleas:

What was turning out to be a peaceful Saturday night dinner for me turned into a digital nightmare when Facebook suddenly disabled my account after I sent a photo of a cat on messenger to a friend after receiving it on WhatsApp.

That sounds really ridiculous right? Cat photos are really 90% of the internet and why on earth was my Facebook account disabled for sending this over Messenger, not even posting it on my timeline.

Krish was chatting with friends over Facebook Messenger. After sending the image of a cat attorney, Messenger “automatically” logged him out.

He went into his Facebook app, which gave him a message about his session having timed out and asked Krish to log in again.

It all happened in a matter of seconds. His Facebook profile, along with a list of friends containing more than 3,000 profiles, pulled a disappearing act like a little wisp of a mouse tail disappearing into a hole in the wall.

Krish and others were left to puzzle it out. From whence came this sudden cat allergy?

Perhaps it was an offensive message hidden in a watermark?

Well, of course it means something! Vallithode is a Federal Bank of India branch, as can attest anybody who’s read the mesmerizing (PDF) PMRY Subsidy list of beneficiaries.

And it’s probably not “sucheesh,” as a Google search suggests: more likely it’s “sudheesh,” which of course is probably a variant spelling of “Sudhish,” a boy’s name meaning “Lord of excellent intellect.”

In other words, Facebook probably didn’t want to hurt Mr. and Mrs. Vallithode’s feelings by telling them that their son, Sudhish, was dressing up like a cat, thereby displaying tendencies of the Lord of feeble intellect.

Or then again, maybe some errant code in the image’s metadata was causing it to be interpreted as offensive.

Whatever caused the glitch, it was fixed sometime over the weekend.

Techzei reports that as of Monday, the bug had been around for over 2 weeks. All of the accounts have since been reinstated.

I guess the cat’s got its tongue.