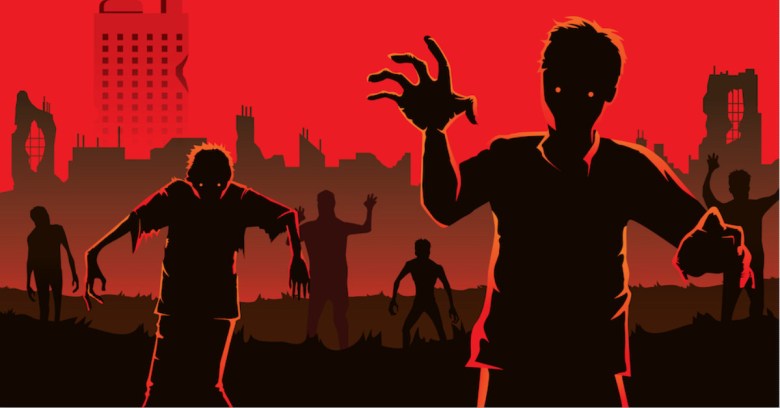 A DDoS attack is an aggressive sort of DoS attack, where DoS is short for denial of service.

A DoS is a bit like getting into the queue at the station to buy a ticket for the next train, only to have a time-waster squeeze in front of you and slow you down.

By the time the miscreant has asked, innocently enough, about the different sorts of ticket available, and whether it costs extra to take a bicycle, and how much longer it would take if he were to change trains in Manchester, only to walk off without buying a ticket at all…

…you’ve watched your train arrive, load up with passengers, and depart without you.

A DDoS attack is worse: it’s short for distributed denial of service attack, and it’s much the same thing as a DoS, except that the trouble-stirrer doesn’t show up on his own.

Instead, he brings along a big posse of innocent-looking accomplices to flood the whole station with time-wasters.

Genuine customers who are mixed in with the trouble-makers end up waiting far longer than usual – a problem that usually gets more and more frustrating as the backlog grows.

In the attack on Krebs’s site the crooks were able to generate an astonishing combined total of over 600 gigabits per second of time-wasting network traffic.

That’s equivalent to about 60,000 fast home networks all turning their entire bandwith onto Krebs at the same time, or a whopping 600,000 regular ADSL connections at once (assuming a one megabit per second upload speed).

If we assume that even a voracious reader of Krebs’s articles would use at most 10% of a home ADSL connection’s bandwidth when browsing the site, then the cost of neutralising this level of attack is the same as supporting at least six million concurrent legitimate users.

The perpetrators in the mega-DDoS haven’t been identified, but the attack happened not long after Krebs outed a DDoS-for-hire service called vDOS, leading to the arrest of two young hackers in Israel.

(Sophos experts Chester Wisniewski and John Shier discuss this attack, and the story behind it, in this week’s Chet Chat security podcast. [Starts at 1’08”.])

The reason we mentioned home networks above, by the way, is that’s exactly where this attack seems to have originated.

Not from malicious bot or zombie software on regular computers, as might have been the case a few years ago, but from so-called Internet of Things (IoT) devices such as routers, web cameras and perhaps even printers.

If you’re surprised to hear that, don’t be.

Although a typical router or webcam has just a fraction of the computing power of your laptop, it’s more than capable of filling a typical home network with outbound traffic.

(After all, your powerful new laptop relies on your router to handle all that outbound traffic, so if your laptop can fill up the network connection, that’s only possible because the router can fill it on your laptop’s behalf.)

Sadly, in the aftermath of the assault on Krebs, the source code of the malware used in the attack was openly published.

It’s been removed from the hacking forum on which it was originally outed, but it still widely available “for research purposes” to anyone willing to look.

Mirai, as the malware is known, is badly programmed and unfinished, but that doesn’t matter.

The Mirai bot, called simply bot in the source code, is written in C, and has three main components: 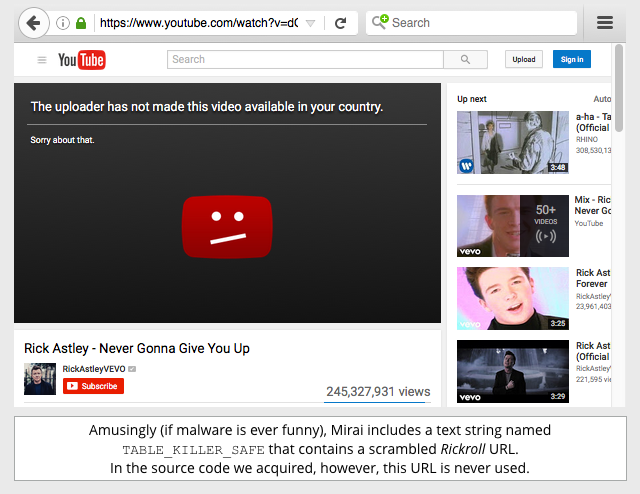 Cross-platform support is one of Go’s strong points: the compiler directly supports seven different computer architecures, including the 32-bit and 64-bit Intel chips in most modern laptops and servers, and the AMD and MIPS chips common in price-sensitive home IoT devices.

In other words, both the attack bot and the control server can be built to run on regular computers as well as many commonly-used hardware devices.

There’s a list of just over 60 built-in usernames and passwords that the Mirai bot uses to scan for other vulnerable devices; by all accounts, even this modest password dictionary is enough to find hundreds of thousands of easily-owned devices at a time. 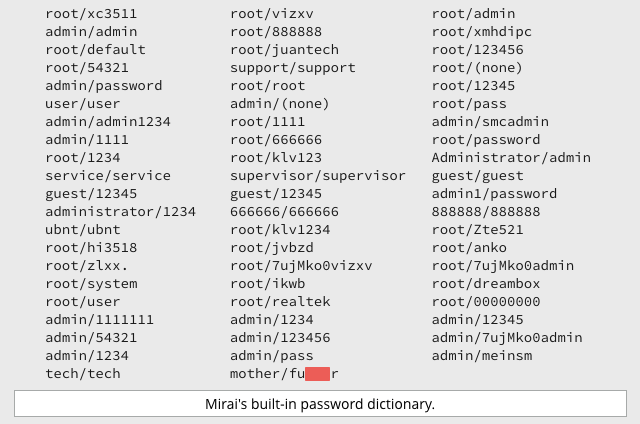 As we suggested above, between 60,000 and 600,000 home networks connecting simultaneously is, indeed, enough for a monster-sized attack of 600 gigabits per second.

We’re disappointed, but not at all surprised, to hear that malware like Mirai has things so easy.

After all, when SophosLabs researchers recently looked into a strain of malware called Mal/Miner-C, they noticed that it was widely found on network attached storage (NAS) devices from a well-known vendor.

In this research, SophosLabs quickly found 7000 NAS devices that were publicly writable via the internet, using the FTP protocol, with no password at all.

Of these, 5000 (more than 70%) already contained a copy of the Mal/Miner-C malware, deliberately left behind by the crooks for future malware distribution campaigns.

When investigating the Miner-C malware, our researchers focused their investigation carefully. They looked only at NAS devices, only for public FTP servers with no password, and only for the presence of Mal/Miner-C. Malware such as Mirai has no such scruples when it goes looking for vulnerable devices, which is why it can quickly find hundreds of thousands of devices to abuse.

Following the attack on Krebs, and his fascinating reports on what happened, he wrote that:

Many readers […] asked for more information about which devices and hardware makers were [targeted by Mirai]. As it happens, this is fairly easy to tell just from looking at the list of usernames and passwords included in the Mirai source code.

As you can see directly from the list above, and from a few tries with your favourite search engine, Krebs is right.

Some of the entries don’t even need a search engine: username/password pairs such as root/­realtek, root/­dreambox and ubnt/­ubnt speak for themselves.

But even obscure-looking credentials such as root/­7ujMko0vizxv are easily traced.

And that’s just the problem with hardwired “backdoor” passwords, as we’ve pointed out many times before.

Security through obscurity lasts only until someone penetrates that obscurity and shares the necessary secret, after which anyone can search for it, and so everyone knows it.

If you’re a device vendor, this list is for you:

For more IoT security horror stories from which we can all learn, both vendors and consumers, please see: