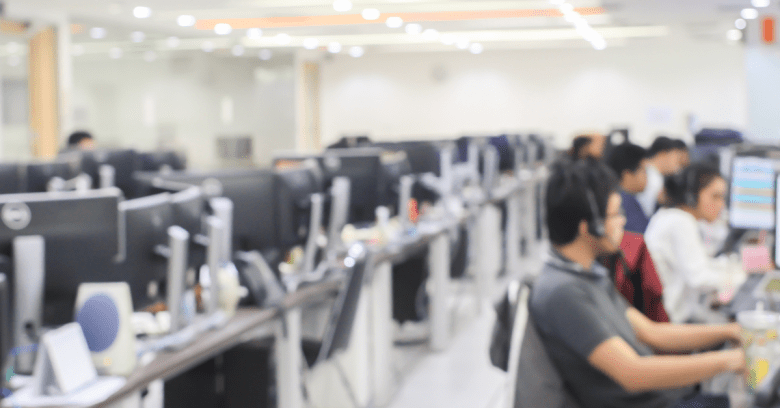 As the Wall Street Journal tells it, police said at a news conference on Wednesday that 200 police had raided 3 bland buildings in the Mumbai suburb the night before:

Police said three nondescript office buildings on the edge of this booming Mumbai suburb were packed with hundreds of people posing as Internal Revenue Service officials in a scam that has vexed Americans for years.

Thousands of calls went out from nine call centers on a daily basis as the scammers tried to trick naïve Americans into handing over bank details or sending gift cards to “settle” their cases.

The workers were allegedly trained to speak with American accents.

According to the Guardian, Paramvir Singh, the police commissioner of Thane, said that 70 workers at the so-called “scam center” have been formally arrested, and around 630 others are being investigated.

They’ve got plenty of material to go over as they investigate: conveniently enough, the call centers kept recordings of the calls.

We had a mole go in to the call centers to verify. The best part is that they were actually recording all their calls. We have recovered 851 hard disks on which the calls were recorded, so we’re going through those now.

Employees were allegedly telling their targets that they’d defaulted on tax payments and that the IRS was set to prosecute them, Singh said:

They were instructed to stay on the phone and told that their homes would be raided by police within 30 minutes if they hung up. They made threats, they said: ‘You have to pay, otherwise you will lose your job, your money, your house.’

Police said that the crooks allegedly duped people into giving the callers their bank details. Then, they’d drain the victims’ accounts, transferring the money into a US bank account.

Alternatively, the scammers told their victims to stay on the call and go to their nearest Target or Walmart store to buy prepaid gift cards – such as iTunes gift cards – and load them up with thousands of dollars.

Police haven’t put an exact figure on how much money the call centers pulled in or whether they were targeting people from other countries.

Singh did say, however, that the centers were running for over a year. He estimated that they’d managed to con thousands of people out of billions of rupees.

One billion rupee converts to about $15 million USD, or about £12 million.

We’ve been getting calls all morning from American citizens, people saying: ‘I think I got one of these calls. I think my money was stolen.’

At Wednesday’s news conference, Thane police played one of the call recordings they said they’d taken off the call center’s computers.

A caller with a heavy Indian accent told a man he owed more than $11,780 and was facing arrest within hours, a five-year prison term and $100,000 fine if he didn’t settle. The call was handed to a “senior treasury officer,” who told the man he can pay whatever he can afford right away by going to the nearest Walgreens to buy Apple iTunes gift cards worth $1,000.

“Keep yourself on speaker and get dressed,” the man was told at one point. “We are running short of time [and] within two hours you will be taken into custody.”

It turns out that the target in that particular call hadn’t actually fallen for the ruse: rather, he was just stringing along the caller to waste his time.

The script for the calls is a familiar one: a variant is used in the “you didn’t show up for jury duty” scam.

Both the you-owe-the-IRS-money fraud and the jury duty scam are the love children of fake support calls and lockscreen ransomware.

Bogus support calls bludgeon you into paying for crooks to pretend to remove a virus infection that doesn’t exist.

Lockscreen ransomware extorts payment of a pretend fine for a criminal offense you never committed.

They all rely on the same type of pressure: they try to scare you to the point that your judgment jumps out the window.

The details change, but the spook-you factor remains.

So, “Your computer is infected and currently attacking our network with malware! We’re not happy with that, but luckily for both of us, we can help you. For a fee…”

…turns into, “You’re delinquent on your tax payments! You’re in big trouble, bub, and we’re sending over the police right now! All you have to do to get out of this mess is pay this fine. Just give us your bank details, or maybe some nicely plumped-up gift cards, and we’ll let you off the hook.”

A few years ago, we recorded a podcast about how to avoid fake support calls, and by extension any similar sort of high-pressure “pay a penalty, pay it now” call.

If you know anyone who’s been targeted by this sort of scam, please urge them to give the podcast a listen, and help them gain the confidence to hang up at once. (These scammers are notorious for calling over and over again, ramping up the threats, if they don’t succeed right away.)

The calls may well look like they’re coming from perfectly legitimate places if you check out the caller ID numbers.

But bear in mind that there are multiple reasons why a legitimate-looking caller ID might be bogus.

It could be that the origin of the call is being spoofed.

Alternatively, scam calls often come from outside your own country via a VoIP (voice over IP) service and emerge into the telephone network from some local provider, which not only makes the caller seem nearby but also saves the scammers a small fortune in call costs.

Callers can be convincing: they may know a lot about you, may spoof the caller ID so the call looks like it’s legitimately from the IRS, and/or may use fake names and bogus IRS identification badge numbers.

The IRS has published this list of things it never, ever does. They’re a tell-tale sign that a call’s a scam:

Nor does the IRS use unsolicited email, text messages or any social media to discuss your personal tax issue.

If you do get a phone call from someone claiming to be from the IRS and asking for money, the IRS has this advice: