Ransomware has been a huge problem for several years now.

The first wave of money-grabbing ransomware didn’t even bother with encryption, but simply locked up your computer.

Almost as soon as you logged in, you’d be shoved into a programmatic cul-de-sac in which the only software running was your browser in full-screen mode, and the only web page visible was one squeezing you to pay a “fine” to remove the software lock.

Eventually, however, word got around that you could simply boot from a recovery CD or USB such as Sophos Bootable Anti-Virus, and get rid of the malware without paying.

Also, the crooks alleged to be behind the main strain of lockscreen ransomware, known as Reveton, were arrested in Spain, which put the kibosh on things.

The next wave of ransomware left your computer unlocked, and all your apps running just fine, but scrambled your data instead.

Instead of buying a PC unlock code, you bought a data unlock code – literally, the cryptographic secret needed to decrypt your scrambled files.

Leaving your operating system and your browser running correctly actually helps the crooks to close the deal.

You don’t need to find another computer to get online and pay up, thus making the whole process easier and giving you less time to talk yourself out of dealing with the crooks.

Until 2016, most cryptographic ransomware, or cryptoransomware for short, used a two-stage encryption process something like this:

AES is used for the bulk encryption of all your files because it’s designed to be fast and efficient when used for this purpose. But AES uses the same key for locking and unlocking, so the crooks then use RSA to encrypt the AES key, thereby preventing you from figuring out what it is. This system works because RSA, unlike AES, uses different keys for locking and unlocking: a public key to lock, and a private key to unlock. As long as the crooks keep the private key to themselves, they’re the only ones who can decrypt the encrypted AES keys, and without the AES keys, your data is unrecoverable. (This two-stage system is needed because RSA on its own is too slow and complex to scramble whole files.)

There are numerous slight variations on this approach, but many ransomware samples, including families we’ve written about before such as CryptoLocker, CryptoWall, TeslaCrypt, Locky, Zepto and Odin, use RSA on top of AES to handle their cryptographic needs.

But 2016 seems to be the year that the ransomware scene began to fragment, with various newcomer crooks trying their hand at new strains of malware using similar, yet, different, attack techniques.

Petya, for example, left your files alone but scrambled what’s known as the Windows Master File Table (or MFT) instead.

The MFT acts as an index to the raw data sectors that make up the directories and files on your disk.

Wiping out the MFT is like having a map from which all the roads have been erased, and where names of all the towns and cities have been cut out, put into a hat and shuffled up.

You can still tell that there’s a place in England called Oxford, for example, if you go carefully through all the names in your hat, but you won’t have any idea where where it is, let alone how to get there.

Mamba took this idea one step further, and scrambled your entire disk, just like Apple’s FileVault or Microsoft’s BitLocker.

In fact, Mamba “cheated” by simply installing an actual full-disk encryption product – a ripped-off open source project called DiskCryptor – but keeping the boot-time key secret, so the crooks could sell it back to you.

Here comes another proof-of-concept ransomware sample with a new twist, going by the name CryPy.

It’s written in Python, it does encryption, and it doesn’t exactly make its victims want to smile, thus Cry and Py.

There’s no real cause for alarm, at least from the sample we’re describing here, because CryPy relies on a web server that’s offline now, and we can’t get the malware to work reliably even by simulating the now-missing web backend.

Neverthless, the malware has been compiled into a Windows .EXE file (executable program) from which the Python source code can easily be extracted, so we may yet see other cybercrooks having a crack at CryPy’s experimental approach.

The big difference between CryPy and the CryptoLocker sort of ransomware is that CryPy calls home to a control server each time it finds a new file to scramble.

The malware makes an HTTP request containing a unique identifier for the victim plus the original filename for each file; the server replies each time with a replacement filename and a one-time random AES encryption key.

In other words, this ransomware introduces three new angles to the threat.

Firstly, it actually steals data, albeit only your filenames, as well as scrambling your local file copies.

Secondly, it leaves the crooks in a position to ransom each file individually if they wish, or to set prices depending on how valuable they think the file might be from its name.

Thirdly, there’s no need for RSA (or any other sort of asymmetric cryptography) and public/private keypairs, because the one-time keys are all generated and stored on the server.

These tricks make the ransomware harder to find, harder to remove, harder to recover from, and capable of doing much greater damage.

Finally, CryPy creates a file called README_FOR_DECRYPT.txt on your desktop, telling you how to contact the crooks to negotiate to buy back your keys. 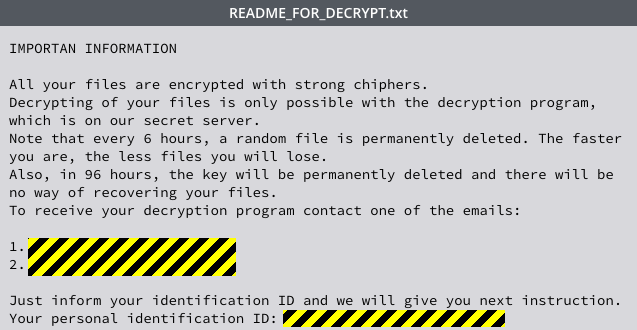 Let’s hope that ransomware with variable pricing based on how much each file is likely to be worth doesn’t become a reality.

Fortunately, CryPy’s process of calling home once for each file makes both the malware and the backend systems more complex to build and operate, so there’s a downside for the crooks.

Whatever happenes, of course, the best defence is clearly not to get infected in the first place.