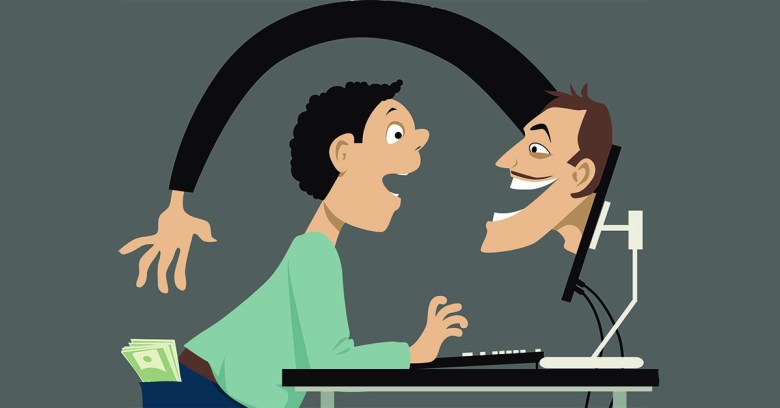 For anyone living in the US, a new study from Microsoft suggests the chances of losing money when encountering this kind of scam are a surprising – and shocking – one in five.

Top of the list was India, where 22% of those targeted fell for the ruse, with the US and China close behind on 21% and 16% respectively.

Only 2% of Britons lost money, making them by some distance the most resistant nation of those studied, with Germany, Denmark, France and Canada also achieving low victim rates.

This kind of scam has several forms.

The oldest and simplest is where criminals cold call home users pretending to be from a legitimate company with the news that an infection has been ‘detected’ on their PC.

There is no infection of course, but scammers will try to persuade users they should pay a fee of between $50 and $300 to clean up the non-existent problem, usually after taking remote control of their computer to generate false alerts.

Another variation involves computer pop-ups, which borrow tactics from the fake anti-virus industry to try and convince users they need to pay through the nose for remote tech support when all the users really end up with is an empty wallet.

The difference Microsoft found between countries and age groups is intriguing.

The young (18 to 34) were significantly more likely than older users to fall prey to these scams regardless of nationality, which Microsoft speculates could be due to their trusting nature.

An alternative explanation is that younger people use the internet in a way that makes them more likely to encounter certain kinds of tech support scam.

For example, the young reported experiencing more web redirects of the sort that often lead to sites hosting tech support scam pop-ups. It could simply be that this tactic is more effective.

A second outlier was the high number of US users who report losing money to tech support scammer – ten times the rate for the UK.

Users also seem to be more susceptible to tech support fraud when the caller or remote support assistant claims to be from a company they trust.

Ironically, one of the brands tech support scammers are most likely to impersonate is Microsoft itself, despite the company’s warning that it does not use remote support in this way:

Microsoft will never proactively reach out to you to provide unsolicited PC or technical support. Any communication we have with you must be initiated by you.

And yet in the US, the study found that nearly half of users thought that Microsoft would be very or somewhat likely to do such a thing. The figures for email contact mirrored this perception.

However, many firms do use such channels as part of their marketing, so it’s no wonder that consumers end up confused about where boundaries for normal communication lie.

Tech support scams might be an old con but they could be with us for some time yet.