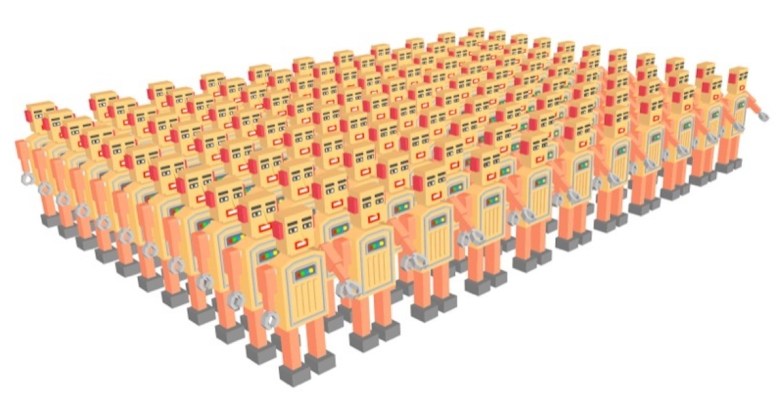 ‘Social bots’ are on the march on Twitter and a surprising number think Donald Trump should be the next US President.

A new study by UK and US academics discovered that these bots – computer Twitter accounts that post messages automatically – made up 39.1% of sampled tweets supporting his cause in the aftermath of the first presidential TV debate on 26 September.

Analysed by sifting 4.5 million political tweets for pro-Trump hashtags, this means that a staggering 1.76 million messages of support were posted in his favour by machines rather than people.

In case it sounds as if Hillary Clinton is being left out, she appears to have her own bot army, albeit a smaller one that tweeted 612,000 messages (13.6%) preferring her.

The most active bots spewed a prodigious 1,000 or more tweets per day, perhaps twenty times the volume of even the most enthusiastic human user.

So who is behind these robotic accounts? The researchers have an explanation:

These accounts are often bots that see occasional human curation, or they are actively maintained by people who employ scheduling algorithms and other applications for automating social media communication.

Not all tweet bots take sides – a further 1,616,000 tweets (35.8%) were categorised by the researchers as neutral towards either candidate.

This holds a clue to the wider bot phenomenon, which Twitter has admitted accounted for eight percent of its total traffic in 2014.

These days, bots have quietly become an important tool of what the researchers call computational propaganda in which social media becomes a medium to be inhabited and dominated in the interests of one point of view. Using bots is simply an easy way to achieve this.

As the researchers note:

A growing number of political actors and governments worldwide are employing both people and bots to shape political conversation.

Wielding bots in this way is about crowding out the messages of opponents to make a viewpoint appear more (or less) popular on social media than it is.

Therein lies the danger of overuse and misuse – once voters realise that robotic tweets are from machines rather than people they might start discounting them. The issue, then, becomes how users distinguish a human tweet from a bot one.

This matters because Twitter bots have also been accused of being used as sophisticated and sinister tools for generating disinformation.

And it’s not just social media – bots turn out to be everywhere if you know where to look.

A 2015 study by DDoS-protection firm Incapsula found that bots generate a surprising half of all Internet traffic.

Around 40% of these are ‘good’ bots used to carry out automated tasks with the remaining 60% of ‘bad’ bots made up from an assortment of spamming systems (botnets), scraper bots used to extract data from websites, and impersonators that try to create legitimate-looking accounts on websites for nefarious purposes.

Who said the internet was for people?