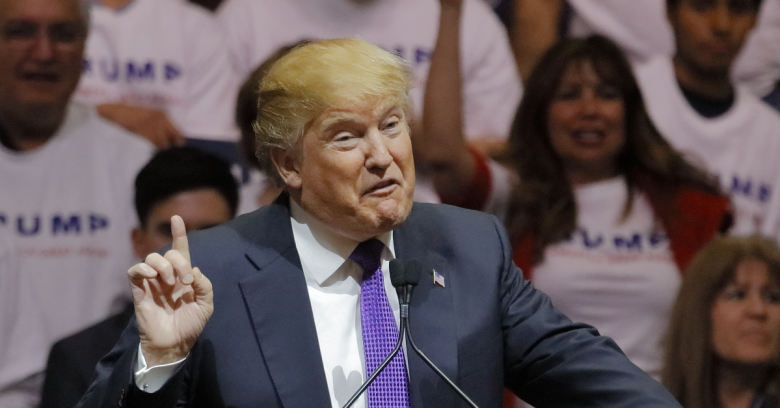 How troll-like does president-elect Donald Trump have to get in order to be kicked off Twitter or Facebook?

It’s got an answer, too, though it’s not as black and white as it first appears.

The simple answer is that it depends on which platform you’re talking about. The more complex answer is that given extreme enough content, both probably would ban him. The flip side of the coin is that both platforms are going to put up with an awful lot in the name of newsworthy content.

Twitter says its normal community standards for hate speech and harassment apply to anybody, be they nameless, named, quasi-famous, of verified account status, or even the president himself.

Facebook says it’s more willing to take context into account. And in this case, the context includes the value of political discourse, newsworthiness, and widespread popular support for Trump’s views.

When we review reports of content that may violate our policies, we take context into consideration… That context can include the value of political discourse.

And this is what Twitter had to say about the possibility of banning government officials or even the president himself:

The Twitter Rules prohibit violent threats, harassment, hateful conduct, and multiple account abuse, and we will take action on accounts violating those policies.

The Twitter Rules apply to all accounts, including verified accounts.

As of 23 October, Trump had used Twitter to insult 282 places, people and things, from calling President Obama the “worst president in US history” to accusing the New York Daily News of “bleeding red ink“.

The New York Times knows, because it counted.

It also linked to every one of those attacks on reporters and publications (including on the publication itself), dissemination of inaccurate news and conspiracy theories, insults meted out to political rivals, and calls for religious discrimination.

The failing @nytimes has become a newspaper of fiction. Their stories about me always quote non-existent unnamed sources. Very dishonest!

Trump’s posts about banning Muslims from entering the US have spurred some Facebook employees to push to have them classified as hate speech and removed, as the Wall Street Journal reported at the end of October.

CEO Mark Zuckerberg reportedly had to personally intervene to keep the posts from getting removed: an intervention that insiders say caused employees to complain on Facebook’s internal message service and in person to Zuckerberg and other managers.

Their concern was that the rules about unacceptable content and hate speech were being bent for Trump. Some employees working in a group that reviews content even threatened to quit over the issue, according to the WSJ.

At the time of the WSJ report, Facebook gave the newspaper what’s now a consistent rationalization for treating Trump with special care, saying that context matters when reviewing what content to take down.

That context can include the value of political discourse. Many people are voicing opinions about this particular content and it has become an important part of the conversation around who the next US president will be.

Facebook followed up by posting details about its rule-bending:

In the weeks ahead, we’re going to begin allowing more items that people find newsworthy, significant, or important to the public interest – even if they might otherwise violate our standards.

In the Techonomy interview in which he dismissed the idea that social media-spread hoaxes had swayed the election, Zuckerberg had this to say about the hands-off approach to Trump’s page:

Our real goal is to reflect what our community wants. That kind of content we would have thought that, previously, that would make a lot of people feel uncomfortable and people wouldn’t want that.

But at the point where, you know the person who’s elected president of the United States is expressing that opinion and has 60 million people who are followers, then the question is: I think that is mainstream political discourse that I think we need to be pretty careful about saying that that’s not a reasonable thing.

Twitter’s apparently less accommodating approach may have something to do with a long struggle to deal with trolls and abuse – something that CEO Dick Costolo noted, in a February 2015 internal memo, that the company sucked at.

For the past few years, it’s been trying to not suck.

A few weeks ago, Twitter added new tools for users to report, block or mute harassers and trolls.

As Slate’s Will Oremus points out, the two platforms’ apparently opposite approaches to the question of banning Trump are in line with their recent history: Twitter’s been battling trolls, while Facebook has been strenuously setting itself up as a neutral platform, not as a major cog in the online news dissemination machinery.

Bear in mind that regardless of Twitter’s ostensibly hardline attitude toward treating all accounts the same vs Facebook’s more accommodating, context-matters approach, nothing Trump has done so far has qualified to get his Twitter account disabled nor to have his Facebook posts flagged as hate speech.

Take those two realities and put them up against the positions that Twitter and Facebook have taken publicly: the “everybody’s the same” line that Twitter’s pushing, vs the “context matters” line that Facebook’s sticking to.

Which one do you agree with? Tell us in this poll.

Can’t see the poll above?
Vote directly on Polldaddy’s site.