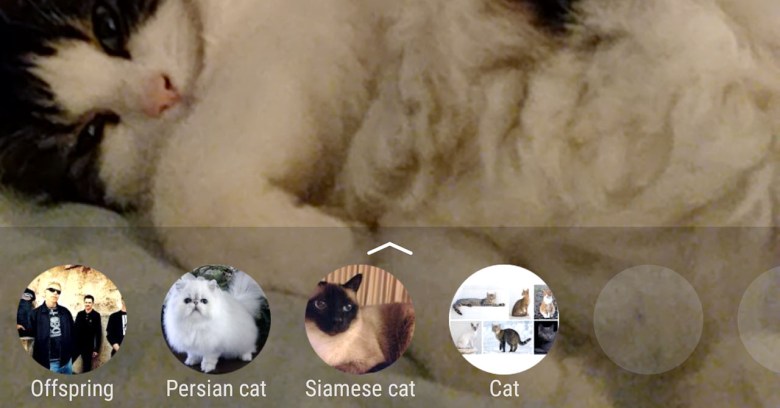 Blippar, an augmented reality startup that uses machine learning to recognize and catalog objects, has added faces to its mix.

The app festoons the objects it scans with halos of links to more information and presents the graphics to mobile users (it did a reasonably good job on a Naked Security cat, pictured above) though we did wonder about the “offspring” classification.

The result is an “Augmented Reality Face Profile,” according to Business Insider.

At first blush, it sounds like it will be great for those who can’t remember people’s names and terrible for the privacy-minded, who’d rather you didn’t point this real-time facial recognition at them anyway.

Blippar says it’s providing this “unique augmented reality experience” only for people who have a recognized face profile.

The company seeded its launch with profiles it created for more than 70,000 public figures. Eventually, users will be able to set up their own profile via the app’s selfie mode.

A recent update to the Blippar app allows people to recognize/”blipp” many public figures from today onwards.

A very exciting feature for users to create their own face profile in augmented reality will also be launching very soon.

The facial recognition piece builds on top of the so-called “Blipparsphere” that the company launched in June. As you can see in its promotional video below, the aim is to unmuddle you when you’re doing things like, say, staring at a purple flower and wondering what the heck that thing is called (hydrangea!).

Point your camera at a guitar, and presto, you’ll see links to information on how to learn how to play it. And of course – marketing manna! – point your mobile phone at a Starbucks coffee cup, and you’ll get the brand’s Seattle story.

As you can see in the company’s graphics, users’ face “augmented reality” profiles have halos of five circles. Each circle links to more information on a users’s profile, including “mood and aura,” photos, favorite music and a “celebrity look-alike” feature, according to BI.

Blippar co-founder Omar Tayeb told the BBC that privacy is “baked in” to the Blippar app. Even those 70,000 celebrities can have their faces removed (though it doesn’t sound like they were given the “opt-in only” option before their profiles were created!).

It’s a totally opt-in service, the user has full control over what’s shown and they’re able to deactivate it at any time.

The BBC’s Rory Cellan-Jones had a good question for him: what if a sneaky friend snapped your photo and made up a profile on your behalf?

Tayeb said that creating a profile is more involved than that: it entails taking moving pictures of your own face. He said that the system is savvy enough to recognize if someone’s trying to register someone else’s image, though he didn’t give details on how.

While it sounds like Blippar has a well-thought-out approach to privacy, it’s appropriate to bear in mind what can go wrong with facial recognition that hooks up with our social media profiles.

They did it by tying together disparate data sets in Big Data fashion: users of an imageboard called Dvach used the FindFace service to match explicit photos with images posted to the Russian version of Facebook: the social network VK (formerly known as Vkontakte).

The imageboard Dvach – Russian for 2chan – is called the Russian version of 4chan.

The popularity of Dvach’s de-anonymizing-via-facial-recognition methodology exploded after photographer Egor Tsvetkov showed how easy it was to take photos of riders on the metro and match the images with their VK social network profiles.

And then of course there was Google Glass: the lollapalooza of fears over privacy invasion. Privacy concerns made Google’s photo-snapping, video-taking headhuggers smell like yesterday’s fish as it was, even without facial recognition, and those concerns led to Google deciding against incorporating facial recognition at all.

That didn’t stop others from doing it, though. There was NameTag, an app for rooted Glass devices that could spot a face and wirelessly match it up to social media profiles, for one.

As well, there were the Dubai police who went right ahead and added facial recognition to Google Glass.

Let’s hope that Blippar truly has made it impossible for somebody to just walk up, point their phone at you, give you the “Say cheese!” prompt, and enable the internet to image-search the blipp out of you in every otherwise obscure corner of your online life.