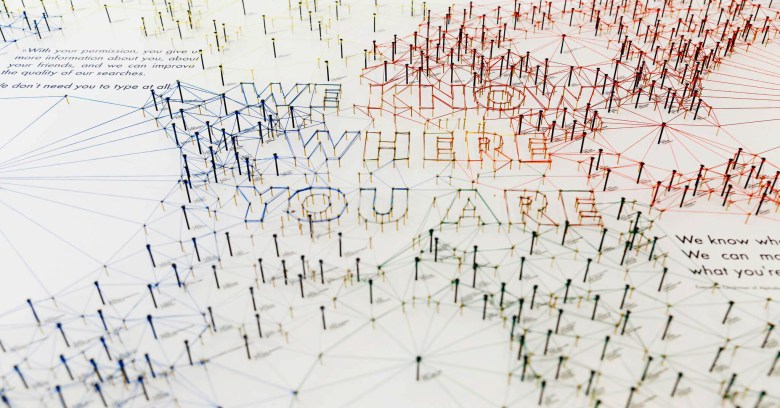 Ever get that feeling, walking down a busy city street, that somebody’s following you?

If it’s Mulberry Street in New York’s SoHo neighborhood between now and 18 December, somebody – or somebodies – probably are.

“They”, in this case, are the Glass Room: an installation that looks for all the world like one of those gleaming, all-white, full-glass-front tech stores –  like one of Apple’s retail stores.

The Glass Room isn’t actually selling anything. But it certainly has products on display. Those products are us: specifically, the commodities that Big Data has turned us into.

In the words of The Gothamist, the Glass Room will tempt some of us to burn their iPhones. In the words of Motherboard, it’s where privacy goes to die.

The installation is offered courtesy of Mozilla, maker of the open-source Firefox browser, and the Tactical Technology Collective, a Berlin-based non-profit group that explores the political and social role of data in our lives.

Behind that gleaming storefront is what looks like Apple’s Genius Bar – white stools and all – but what is actually the Data Detox bar.

You can’t talk to Apple’s “Geniuses”, but you can talk to the Glass Room’s Ingeniuses. These friendly jumpsuit-clad people will take you into a deep dive to show you how the data that we leak when we use so-called “free” apps, and the data we dribble out of our WiFi-searching mobile phones as we walk down the street, leaves a trail of breadcrumbs that enables Big Data to turn us into monetizable commodities.

As far as following you when you were walking down Mulberry Street, the exterior of the Glass Room is bristling with antennas pointing outward from the store entrance, recording the positions and unique MAC addresses of every WiFi-enabled device that wanders by.

The antennas function in a similar way to the fake cell tower devices – collectively known as stingrays, though that’s actually a brand name for a Harris device – that police furtively use to scoop up phones’ locations and sometimes even the owners’ voice conversations and text messages.

So yes, the Glass Room has been following people down Mulberry Street, scooping up their phone data en masse, then displaying it on a huge screen inside the installation, where the data is displayed in a map as the owners walk around the space.

That’s just one of a collection of exhibits that show how our data is being collected. Those displays are complemented by workshops on how to fight back: how to stop bleeding data by “de-Googlizing” ourselves, for example, by using alternative apps.

From the Glass Room’s site:

‘One account. All of Google’ is Google’s tagline. But what does this mean for those of us who use Google search, Google docs, Gmail and other Google services? What information are we handing over to this multinational company?

And why might we want to diversify the services we use? After a mini-tour of the Google empire (prepare to be surprised!), this session will explore these questions and look at some of the other options out there.

Another piece, the “Unfitbit”, by Surya Mattu and Tega Brain, concerns itself with feeding misinformation about our health habits. As the Gothamist tells it, they came up with the idea after realizing that health insurers could use FitBit data to figure out how much they should charge us for insurance, and that employers could track us to see when we’re at our desks and for how long.

It looks, basically, like a FitBit strapped to a metronome. Judging by the misinformation alone, one would assume the wearer is trapped in a human-sized hamster wheel.

It gets more alarming still. The Gothamist describes a section of the Glass Room that features real apps, including Sickweather, in which people who have colds or feel unwell can mark their locations to warn others walking by.

There’s a tracker people can attach to their aging parents’ medication bottles to make sure they’re taking their pills each day. And there’s a section on the very controversial predictive policing, where visitors can play with algorithms that police departments all over the country use to proactively determine where crimes might take place, though some justice advocates believe these algorithms only amplify existing police bias.

In fact, a 2014 government review found that Big Data can be used to discriminate by doing things such as mapping where we live.

Data collected by companies such as Experian can be used in predatory ways, too: banks can target people who post something on social media about losing a job as being likely candidates for high-interest loans, given that such a person might be open to getting some cash and more prone to overlooking the high interest rate as they struggle to get out of a financial squeeze.

If you want to see first-hand, up close and personal, how our data is being used and abused, you can visit the installation at 201 Mulberry St in New York’s SoHo neighborhood through 18 December: the dates have been extended by popular demand. The gallery’s open 12 to 8 pm daily, and it’s free to visit.