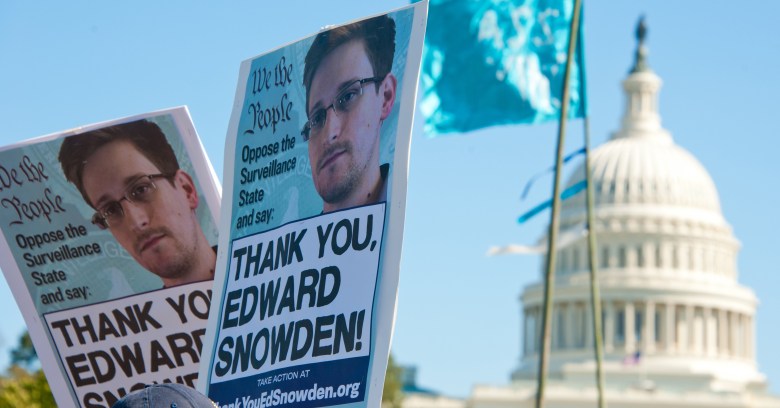 Edward Snowden has denied from Moscow that he’s in regular contact with Russian intelligence authorities after the bipartisan House Permanent Select Committee on Intelligence released a newly declassified report into his activities.

The report says that most of the documents Snowden stole “have no connection to programs that could impact privacy or civil liberties – they instead pertain to military, defense, and intelligence programs of great interest to America’s adversaries”, and added: “Since Snowden’s arrival in Moscow, he has had, and continues to have, contact with Russian intelligence services.”

While some of the report remains redacted, it’s available online, and details a number of allegations about the way he worked with colleagues, describing him as a “disgruntled employee”.

President Obama has been urged to pardon Snowden, but speaking recently to Der Spiegel, he said that while Snowden had “raised some legitimate concerns” … “I can’t pardon somebody who hasn’t gone before a court and presented themselves.”

Uber’s defiant continued testing of driverless cars in San Francisco has come to an end as the Department of Motor Vehicles stepped in to revoke the vehicles’ licences. Meanwhile, Uber has shifted its trial to Arizona, where Governor Doug Ducey said: “Arizona welcomes Uber self-driving cars with open arms and wide open roads … California may not want you, but we do.”

Uber might find a warmer welcome in Norway next year, where the Ministry of Transport and Communications said on Thursday that the government was hoping to have a law allowing the testing of self-driving cars ready to pass by the spring.

What’s worth noting here is the focus on data privacy: “The objective of the bill is to facilitate the testing of self-driving vehicles on Norwegian roads … within the framework of traffic safety while protecting the integrity of personal information,” said the ministry.

In what’s been an extraordinary year of deaths, huge events, fake news and real news, it should perhaps come as no surprise that the most edited page on Wikipedia has been its Deaths in 2016 page, with 18,230 edits at the time of writing. The next most edited page, its Donald Trump one, trails in to second place with a mere 8,933 edits.

Other top slots aren’t especially surprising: the US presidential campaign page is in fourth place, while the page detailing the June Orlando nightclub shooting is in sixth place. However, the popularity of others is a little more baffling: why would the page on the Beverly Gray mysteries, a series of 26 novels published in the mid 20th century, have attracted 4,957 edits, ahead of the page on the Panama Papers? And why might the page on Vincent van Gogh have been edited more often than that on the UK’s referendum on EU membership?

Meanwhile, perhaps most notable of all is that the Wikipedia page on fake news has been the second most frequently edited this month. It may well be close to the top of the league tables this time next year.