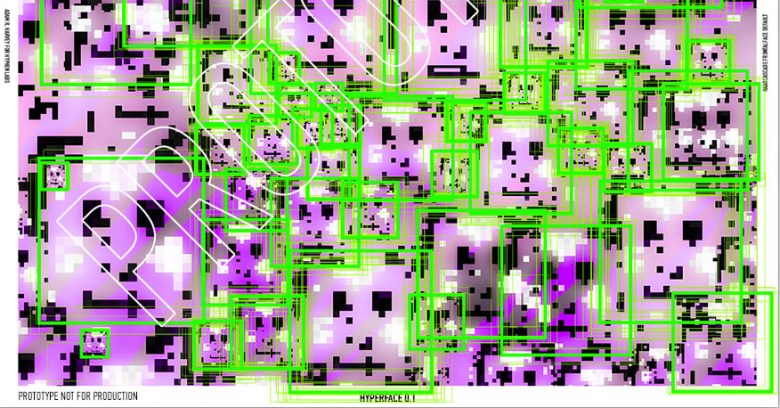 Adam Harvey, the facial-recognition thwarting artist/technologist who brought us neon-blue hair hanging in our eyes and graphic black smears of makeup, admits that it can be, shall we say, aesthetically challenging to conceal a face.

Tell it to the Privacy Visor guys from Tokyo’s National Institute of Informatics (NII) who came out with the Privacy Visor. That nose/eye concealing face gadget was about as aesthetically pleasing as bug eyes with segmented antennae.

Harvey’s latest project is far more wearable. It’s called HyperFace, and it involves printing patterns of pixels on to clothing or textiles that look, to computers, like they could be faces, with eyes, noses, mouths and ears.

You can see what the prototype prints look like on the HyperFace project page.

Previous facial-recognition-confusing projects from Harvey, who’s based in Berlin, include CV Dazzle: an aesthetic of makeup and hairstyling that would make faces more difficult for machines to recognize. And which must make it easy to walk into poles, given all that hair dangling in front of your eyes.

The prints, which could be made into scarves or shawls to wear near, but not necessarily on, your face, don’t try to throw off a machine’s confidence level for recognizing a face. Rather, they aim to mess with machine recognition of the areas surrounding the face.

… which is good, given that for all intents and purposes, thwarting facial recognition looks to be a losing battle, given its increased sophistication and ubiquity: the Center on Privacy & Technology at Georgetown recently reported that there’s major cause for concern about unregulated use of facial recognition by police in the US, for one thing.

The likenesses of about half of the adult population in the country is in there, most of them innocent of any crime, thanks to the flow of photos coming from driver license databases. Those databases are treated by some police forces like their own, private Facebook to search for and ogle people – a privacy invasion over and above the possibility of false positive facial recognition in criminal investigations.

As far as sophistication goes, Facebook’s systems are apparently approaching the point where they don’t even have to see your face to recognize your face, and Microsoft has been showing off technology that can decipher emotions from the facial expressions of people who attend political rallies, recognize their genders and guesstimate their ages.

Researchers have also demonstrated that algorithms can be trained to identify people by matching previously observed patterns around their heads and bodies, even when their faces are blurred or obscured.

It’s that area around the face that Harvey’s HyperFace is designed to obfuscate, by throwing high-confidence-level faces all around your true face so machines will gravitate toward the fake faces:

Here’s the thinking in terms of how HyperFace will camouflage a face:

HyperFace aims to alter the surrounding area (ground) while CV Dazzle targets the facial area (figure). In camouflage, the objective is often to minimize the difference between figure and ground. HyperFace reduces the confidence score of the true face while shifting confidence to the nearby false face regions. This project opens new opportunities for altering the environment and architecture to impact and undermine the effectiveness of computer vision.

HyperFace is being developed for Hyphen Labs’ NeuroSpeculative AfroFeminism project at Sundance Film Festival. It will premiere as a textile print at the film festival on January 16.