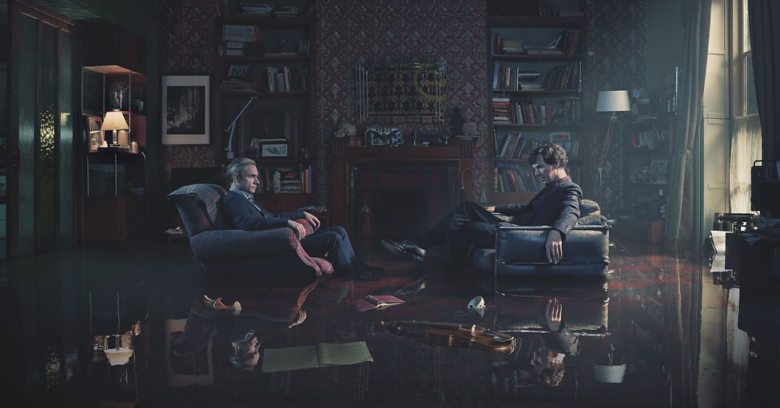 Damn you, Russia, we wish we knew how to quit you!

If you’re not hacking our politicians  and our politicial machinery, you’re leaking a Russian-language version of the recent season finale of the BBC’s hotly anticipated Sherlock a whole day earlier than it was supposed to air.

Maybe. Allegedly. At any rate, Russian state TV is definitely investigating the leak “in close contact with the BBC”, according to Russia Today (RT), Russia’s English-language broadcaster.

Russian Channel One is blaming hackers for the show’s last episode, dubbed in Russian, having been illegally uploaded for all to see and all Russians to decipher on Saturday.

From the very moment it became aware of the leak, Channel One has been in close contact with the BBC and has been conducting an investigation to find the source of materials that leaked to the internet.

…a hacking attack has become the reason.

Hacking? Well, maybe. Or maybe just another skirmish between the BBC and Russia.

The Telegraph reported on Sunday that BBC Worldwide has launched a full investigation into whether its content was deliberately leaked.

The 90-minute episode featured a three-second continuity announcement identifying it as having originated from Channel One, which holds the rights to air Sherlock in Russia, according to the Telegraph.

There are theories about this being the latest in a tit-for-tat that goes all the way up to the Kremlin. The way the Telegraph lays it out, the BBC World Service decided to expand its Russian language output. The Kremlin was not pleased. Nor was the Kremlin happy about a British bank’s unsuccessful stab at shutting down RT’s British bank account.

There have been threats of retaliation. The Telegraph quoted a spokeswoman for Russia’s foreign ministry, who said in October that the bank’s move “reeked of” the BBC and warned that they’d get theirs:

Our stance is straightforward: we will stick up for our own. They [Britain] will get as good as they give.

Punishment seems to be a likely motivation behind the leak, according to analysts. Ben Nimmo, information defense fellow at the Atlantic Council think tank, as quoted by the Telegraph:

As Sherlock Holmes said himself, ‘When you’ve eliminated the impossible, whatever remains, however improbable, must be the truth.

There appears to be no profit motive, no benefit to the broadcaster from doing this. What remains is a political motive. The most obvious explanation is that this is punitive.

Then again, it could have been pure bumbling, another analyst suggested.

There has been a pattern of Russia making short term tactical gains at the expense of long-term strategic losses, so we cannot entirely exclude the possibility that this is a deliberate act.

But it would be so damaging, one has to question whether it would be worth it. So it could be a simple case of poorly executed intellectual property handling.

Nope, said the BBC. After that Doctor Who leak of scripts and footage a few years back, all leakage has been exterminated.

The Telegraph quoted a source at the company:

We have brought everything up to beyond gold standard, which is why things like this are so surprising. This is more than an accident.

…and a BBC Worldwide spokesman:

BBC Worldwide takes breaches of our stringent content security protocols very seriously and we have initiated a full investigation into how this leak has occurred.

Okay Russia hacking countries was bad; but leaking the last episode of Sherlock? Too far Putin, too far!! #sherlock #leaked

…considered whether Russian as a second language might make sense…

at first, teenwolf series was leaked in russia, and now sherlock is. i think, the world should think over studying of russian #Sherlock

So, a Russian copy of tonight’s #Sherlock episode has leaked online. Now we know what Donald Trump gave them in exchange for their silence.

Image courtesy of the BBC.