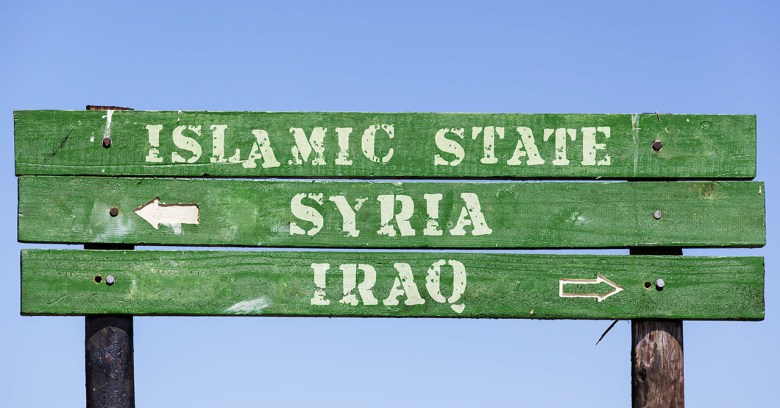 Over the past few months, hobby drones have been modified by the Islamic State (IS) to be small, remotely piloted bombs.

As the New York Times has reported, two Kurdish fighters were killed in October when they were inspecting a drone the size of a model airplane. Le Monde reported that two French paratroopers were also seriously wounded in the explosion.

IS’s use of off-the-shelf or homemade drones is already well-known. It’s previously used hobby drones for scouting and helping to call artillery strikes.

Thinking that the hovering drone was being used for that purpose, the Kurds had shot it down and retrieved it. They brought it back to their outpost to examine it, but at some point it blew up.

It wasn’t an isolated incident, but it’s believed to be the only drone attack carried out by IS that’s caused fatalities. The NYT quoted a senior American official who’d seen a detailed report on the incident:

The explosive device inside was disguised as a battery – there was a very small amount of explosives in it, but it was enough to go off and kill them,.

In November, a commander of the Iraqi Special Forces claimed that militants fighting in Mosul had deployed two drones laden with explosives, both of which were destroyed – the commander didn’t specify how – before they exploded.

IS has also used a drone strapped with an explosive to attack a checkpoint, resulting in destroyed buildings. Meanwhile, in October, Iraqi troops shot down a drone bearing a small explosive attached to the top.

A photo of one of the weaponized IS drones, from Alex Mello, an Iraq/KRG security analyst at Horizon Client Access, an analyst company serving the energy sector.

Nice shot of the improvised release mechanism ISIL is using to drop grenades from commercial off the shelf UAVs https://t.co/Lj8Ltx0arQ pic.twitter.com/KCuzhUbndb

People on the ground have discovered the remnants of the drones, which are sometimes being built from scratch. In February 2016, two weeks after Ramadi had been liberated from IS control, investigators from Conflict Armament Research (CAR) discovered an abandoned workshop where the insurgents had been constructing the bomb-dropping drones, Popular Science reports.

Weeks earlier, CAR investigators had found one such handmade drone, constructed from Styrofoam and model airplane components and outfitted with a video camera. It was too light to carry explosives or other weapons, CAR said in a report on IS’s weaponized drones.

But later that month, CAR investigators found the workshop, and that’s where they found parts for a much larger drone – they found plywood wings that measured 145 cm long – alongside a disassembled missile warhead and the missile’s steering unit.

For us it implied that they were trying to arm it, arm their drones with something that would be light enough to be carried by a drone, but also that would have the right kind of explosives for potency.

Besides making their own, IS is also using drones you can buy from retailers such as Amazon, such as the DJI Phantom, the NYT reports.

In comparison, American militarized drones can be as large as small passenger planes that need to take off and land on a runway. And it’s worth mentioning the obvious: those American drones are already on, above and high above the battlefield, as are drones from at least seven nations (including IS, if it can be considered a state), analysts and officials have said.

It’s long been recognized that the so-called “Obama’s drone war” of targeted drone killings has been used by IS as a recruiting tool.

So the only thing that’s relatively new here is that the drones are being used on the “other” side, by ragtag insurgents lacking funds but with plenty of access to materials to rig up their own killing drones. They’re yet one more weapon in an arsenal that already includes cheap homemade weapons, such as IEDs.

How do you stop them?

There are high-tech, pricey devices out there to bring down drones, but Iraqi and Kurdish forces don’t necessarily have them.

One such, Battelle’s DroneDefender, is a shotgun-like stunner that fires radio frequency hacks that screw with drone commands. DroneDefender operators can remotely disrupt command-and-control signals sent by the drone operator, or they can disrupt a drone’s automatic guidance system.

We’ve also seen tools that work by sound-blasting drones out of the sky, creating a NoFlyZone over a given area, or even raptors trained to take drones down.

Military officials told the NYT in October that the Pentagon’s working on the problem and has ordered the agency in charge of dealing with explosive devices – the Joint Improvised-Threat Defeat Organization – to study ways to defend against hostile drones.

The Pentagon has also requested $20 million from Congress to help address the problem, while the army has created an office to respond to emerging drone threats and to figure out how to stop them.

Where is this all heading to?

As Naked Security’s Mark Stockley points out, the fact is that we are now at the point where off-the-shelf consumer electronics (GPS, drones, cameras, etc.) are sufficiently sophisticated, cheap and commonplace enough that they can be turned into modern weapons: an aerial version of an IED, if you will.

Mark pointed us to Alvin Toffler having anticipated this state in his book, War and Anti-War, 22 years ago. Toffler noted that the interconnected information economy is increasingly able to deliver things that we’ve previously assumed were only available via the sophisticated closed-shop approaches used by big government departments – things like military procurement and intelligence.

For example, what was once on-the-ground, military-level intelligence is being broadcast out of battlegrounds via Twitter.

The next step in this evolution of technology and weaponry is threatening to be autonomous drones: robots that are entrusted with the decision to end human lives. The UN has been trying to work out if it can and should get a treaty to ban such devices: specifically, a potential ban on what are called Lethal Autonomous Weapons Systems (LAWS).

It’s already carried out similar actions. In July 1995, the UN adopted a protocol on blinding lasers, and in 1997, adopted a prohibition on landmines.

We don’t want to see anybody with robots that make killing decisions. But if the technology exists for the US or the UK to do it now, how long will it be before our enemies work out how to plug IBM’s Watson and its ilk into a drone?

Today, it’s a small explosive rigged up to a hobby drone. Tomorrow, we could be looking at the futuristic threat of a technological singularity: the theoretical point of no return where a general Artificial Intelligence starts to recursively self-improve far beyond our ability to understand or control it. Usher in sci-fi references to The Terminator and Arnold Schwarzenegger and nuclear bombs set to annihilate the human race after autonomous AI decides we’re a threat.

As Mark has written previously, a lot of people, not least the Campaign to Stop Killer Robots, and most certainly we here at Naked Security, would like to see such autonomous weapons banned before that can become a reality.