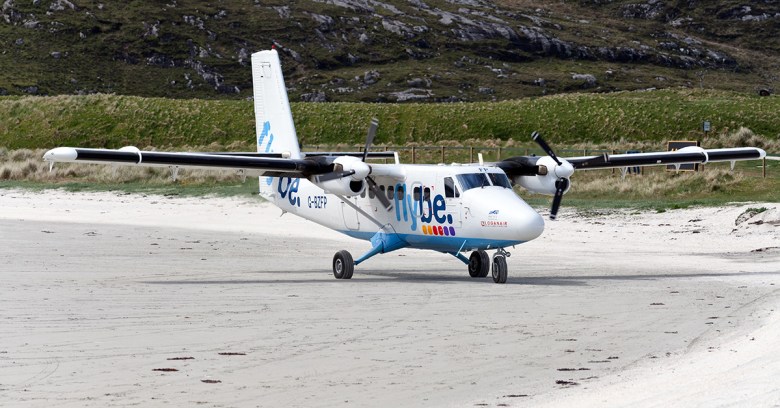 Anyone travelling to Glasgow from one of three Scottish airports can now board the plane without a baggage checks or body search. And if their final destination is Glasgow, the may not be searched at any point in their journey.

Telegraph Travel reports that, while the ban on sharp objects, firearms and liquids in containers more than 100ml still applies, “passengers are only required to verbally confirm they are not carrying these items before boarding flights”.

The three airports – Barra (pictured above), Campbeltown and Tiree – are all small, remote airports run by HIAL (Highlands and Islands Airports Ltd). A HIAL spokesperson told Telegraph Travel that new measures, which have been agreed with the approval of the Civil Aviation Authority (CAA) and the Department for Transport (DfT), are “proportionate to the size of aircraft involved and number of passengers travelling”.

Airport workers’ union Prospect disagrees. Prospect negotiator David Avery is quoted in several articles as saying that this change is “unreasonable and disproportionate and puts staff and passengers at risk”.

Scotland’s Press and Journal reports that the union has pointed out that the flight path into Glasgow is close to a number of potential targets. These include the nuclear power facilities at Hunterston, the large oil terminal and facilities at Finnart on Loch Long, and Ministry of Defence establishments at Coulport, Faslane and Glen Douglas. Avery confirms: “Lowering security at Highlands and Islands airports could make these sites, and the airports themselves, far more likely to be potential targets.”

We asked the CAA for a comment on how they came to the conclusion that the new security measures were appropriate. They pointed us in the direction of the DfT, who responded with:

Following an in-depth review of the security measures at airports in the Scottish Highlands and Islands, passenger screening at airports at Campbeltown and Tiree will be streamlined for customers flying to Glasgow airport. All passengers taking connecting flights from Glasgow to other destinations will need to go through standard screening for UK airports. For security reasons, we are unable to comment further on the precise nature of the changes.

We’re still none the wiser.

The flights from these airports only carry a small number of passengers, many of whom are most likely regular local travellers and holidaymakers. And if you’ve every visited any of the many remote Scottish airports you’ll know that the experience there is very different from the hustle and bustle of mainland airports across the UK and indeed the world.

But an airplane, however small, is still an airplane … and would be a significant security threat in the hands of the wrong person.