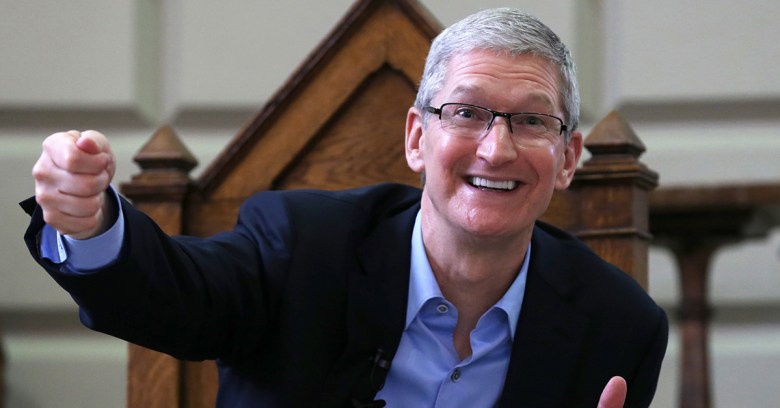 Tim Cook, Apple’s chief executive, has added his voice to the growing clamour calling for steps to be taken to tackle “fake news“.

Speaking to the Daily Telegraph, he said that fake news “is killing people’s minds”, and called for “the modern version of a public-service announcement campaign” to help educate people on the problems caused by fabricated news stories.

Cook said that tech companies must be part of that campaign: “All of us technology companies need to create some tools that help diminish the volume of fake news,” he said, and added: “We must try to squeeze this without stepping on freedom of speech and of the press.”

President Donald Trump, who has yet to publish his promised executive order on cybersecurity, was facing sharp criticism after taking a classified briefing about North Korea’s missile tests by phone in the middle of his Florida estate’s busy dining room on Saturday.

Trump and his guest, Japanese prime minister Shinzo Abe, discussed strategy in front of dozens of fellow diners, with at one point, according to reports, classified documents being illuminated in the candle-lit dining room by light from diners’ mobile phones. Observers noted that it would have been easy for someone to photograph those documents.

One diner posted details of what was unfolding in front of his eyes on his then publicly visible Facebook page, saying: “It was fascinating to watch the flurry of activity at dinner when the news came that North Korea had launched a missile in the direction of Japan. The prime minister Abe of Japan huddles with his staff and president is on the phone with Washington DC.”

If you’re one of those people who have been waiting impatiently for a flying car ever since cartoons you watched as a kid whetted your appetite, your wait could be coming to an end – if you’ve got north of $400,000 to spend.

As well as that chunk of money, you’ll also need a pilot’s licence and somewhere suitable to take off and land: PAL-V says the car needs a maximum take-off roll of 180 metres. The company says it expects to deliver its first flying cars by the end of next year.

2 comments on “News in brief: Cook hits out at ‘fake news’; Trump under fire; flying cars on the runway”