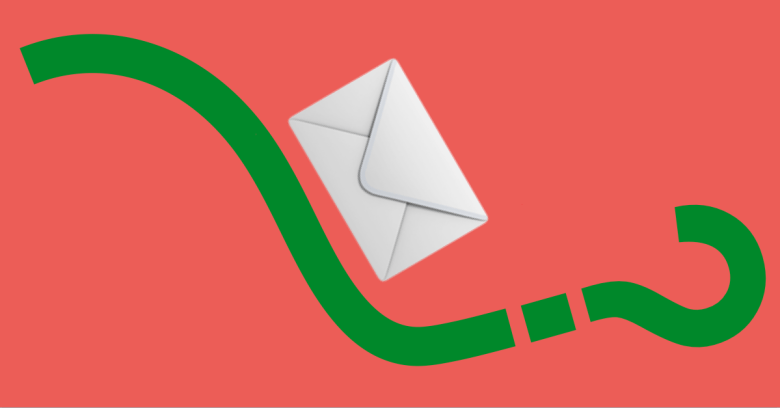 Thanks to Brett Cove of SophosLabs for his behind-the-scenes work on this article.

You might not have noticed, but the amount of spam being sent globally has fallen off dramatically recently.

We aren’t talking about phishing emails, cheap viagra pills and endless surveys where you can win an iPhone that doesn’t exist – those are still spamming inboxes the world over.

We’re talking about the sort of malicious spam that plagues you with information about missed parcel deliveries, fake CVs (resumes) and invoices for services you didn’t use in the hope of tricking you into opening malicious attachments to spread ransomware like Locky or banking Trojans like Dridex.

These attachments come in a variety of forms, such as Microsft Word or Excel documents laced with malicious macros, or more recently JavaScript (.JS) and Windows Script Files (.WSF). The attachments usually follow a similar formula: if you run them, they call home to a server controlled by the crooks and download a malware sample to infect you with, or these days even multiple malware samples.

Something strange has happened in the world of spam, though.

Since just before Christmas 2016, spam levels have dropped by more than half. We have seen outages like this before, but this one has lasted two months now with no sign of spam levels increasing again, although we assume they will at some point.

The chart below represents the spam levels seen in the Sophos spamtrap network, plotted daily, going back to the end of November 2016: 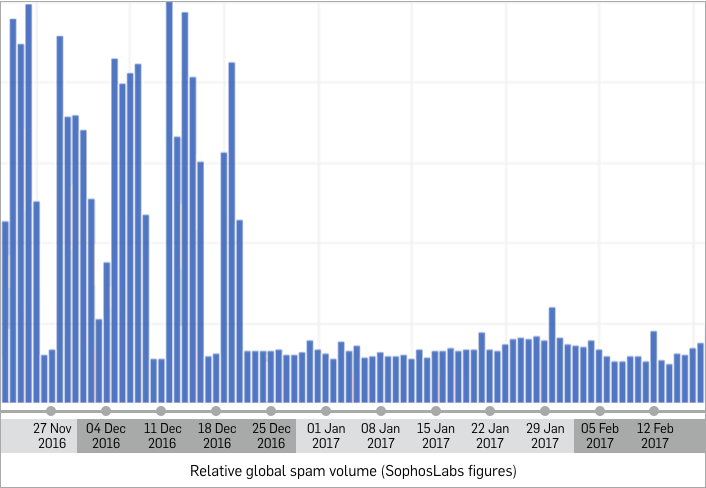 As you can see, the spiky shape of the graph ended just before Christmas 2016 and has not been seen again. (It is also interesting to note that spam levels routinely increased during the working week, from which we assume that even cybercriminals don’t like to work at weekends.)

To rule out the possibility of this being caused by an issue with our own infrastructure, we also looked at publicly available data from CBL, the Composite Blocking List, used by Spamhaus, giving us a graph with a similar shape: 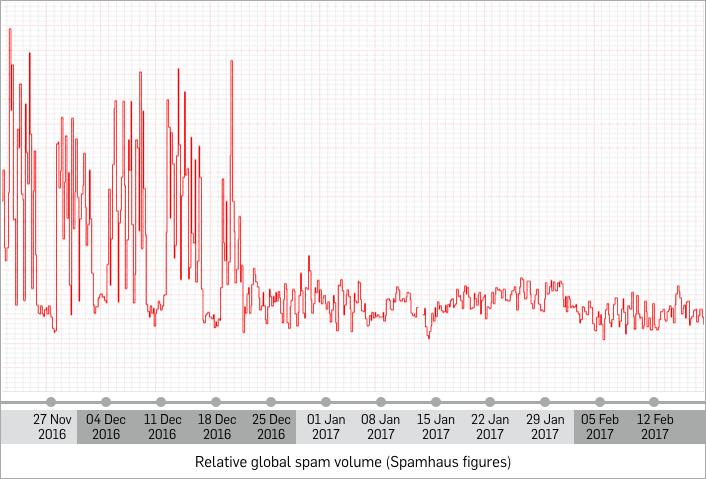 The reason for this has not been conclusively proven, but the evidence points to a notorious botnet called Necurs going quiet.

Necurs is considered by some as the largest botnet ever, with some estimates indicating it consists of more than 6,000,000 infected computers. The majority of infected computers seem to be in India, but almost every country in the world seems to be affected by this malware, with the notable exception of Russia – the Necurs malware deliberately avoids infecting computers set up to use a Russian keyboard.

Interestingly, spam levels also dropped back in June 2016, but, Necurs was back to full strength less than a month later, delivering a new version of Locky.

Why Necurs has gone quiet this time, and how long the “outage” will last, is unknown, as of course is when or if it will return to its former volume.

What we do know is that this hasn’t stopped users being targeted by Locky ransomware or other malware delivered via dodgy attachments or booby-trapped web links, despite the dramatic drop in spam volume depicted above.

For starters, make sure your computer isn’t helping the crooks:

Additionally, if you are a sysdamin looking after your organisation’s email security, be sure to turn on outbound spam scanning. (You’ll be surprised how many companies don’t bother checking outgoing email, treating spam as a purely inbound problem – even though all inbound spam rather obviously started life as outbound spam.)

If you have zombie computers on your network that are sending out spam, you want to know about it!

After all, some of that spam might be targeting your own business, thus creating a vicious circle of infection.

To see the Locky ransomware in action, and how Sophos blocks it, why not watch our video?

4 comments on “Global spam drops by more than half – now what?”