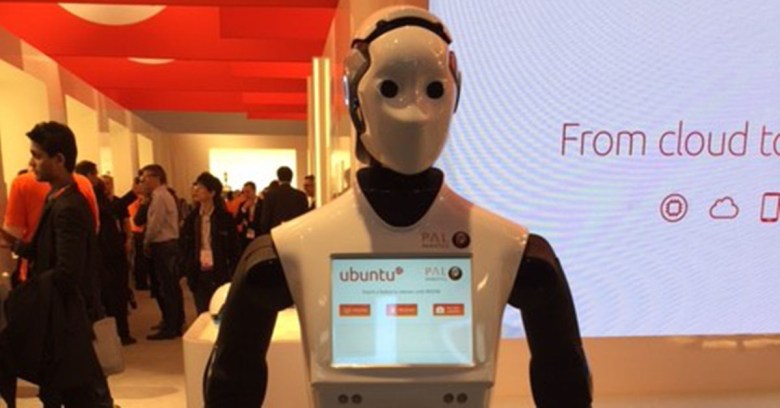 Rick Deckard wouldn’t have had much trouble spotting the robots at this year’s Mobile World Congress (MWC). Instead of having to fire up the Voight-Kampff machine and tediously measure blush response and eye movement, he could surely have “retired” a whole show’s worth of these rather more obvious replicants in a morning’s work, traditional MWC hangover notwithstanding.

For rather than taking on an elegant, stylish and even sensual form – such as those seen in Ridley Scott’s Blade Runner or, more recently, Alex Garland’s Ex Machina – the robots on display at MWC are somewhat on the clunky side still, while also notably lacking in Roy Batty-style guile and intelligence. Typically shiny and white, like a big iPhone with round eyes, they stood out a mile and fooled no one.

The best of these glossy wheelie bins at MWC was undoubtedly Softbank’s Pepper. Originally conceived as a companion robot, Pepper is now more typically being used for marketing purposes in locations such as shops, hospitals, showrooms and banks.

There is some recognition of human emotions, and it has a fairly decent handshake; none of that bone-crushing nonsense you get from the humans at these trade shows.

There was another “dumb bot” also on the Ubuntu stand (pictured), though it paled in comparison with the seriously interesting and Ubuntu-assisted manned robot’ that was filmed recently in South Korea; that one would have really shaken the Fira up. And among the few consumer robotics companies to exhibit at the show was China’s Leju Robotics, which has been working in this area since 2015.

Of course, we cannot really complain about the lack of compelling robots at what is, after all, still a mobile show; the clue is in the name. However, it’s apparent that, as with many other technology categories, there is now a very great deal of overlap between robotics and the mobile sector, and that this convergence seems set to accelerate.

Just look at the way mobile phones are increasingly offering voice activation and AI, perhaps the two most significant technology trends in play today, and both until recently associated mainly with robotics.

Robotic solutions and mobile devices are also benefiting from the emergence of technologies such as image recognition, gesture control and context-aware computing. And both sectors also have the capacity to be greatly enhanced by new high-capacity networks.

Indeed, mobile operators and vendors, keen to make the case for network upgrades, stressed at MWC the low latency of 5G and its importance to emerging sectors such as robotics. By way of example, Deutsche Telecom, SK Telecom and Ericsson demonstrated a tele-presence-enabled robot prototype, noting that 5G’s ultra-low latency enabled it to provide exciting new real-time use cases.

Thinking about it, this convergence of robotics and mobile could make Deckard’s job all the harder. For rather than being rare and expensive bio-engineered androids, it could be that the real replicants are already here in their millions, insidiously posing as mobile phones.