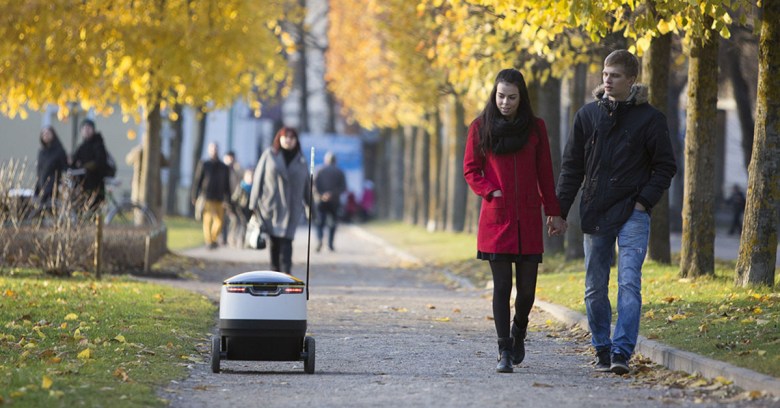 If you’re out and about on the sidewalks of the state of Virginia, don’t be surprised if you spot delivery robots buzzing about: the state has become the first in the US to allow the devices, so long as they don’t weigh more than 50lb (about 23kg) or travel at more than 10mph (about 16kph).

If these delivery robots look familiar to Naked Security readers, it’s because we’ve featured them before, as they’ve already taken to the streets in London: they’re made by Starship Technologies, which advised the state of Virginia as it prepared the legislation to allow them on to the streets.

Virginia residents will see them on the streets from July 1, but reassuringly, although there won’t be a human in direct line of sight, the bots will be carefully monitored by a remote human.

Clova to join Siri, Alexa and other AI assistants

Siri, Alexa, OK Google, Cortana … just in case you don’t have enough AI assistants in your life, Line, the Japanese messaging app, is joining the fray with Clova, which will initially be coming to smartphones and a smart speaker.

Clova, which apparently is short for “cloud virtual assistant”, will be able to converse in Japanese and Korean. As Line focuses on the Asian markets, Clova won’t be a direct competitor to the AI assistants launched by other providers, but it clearly is a bid to regain some of the ground Line has lost to other platforms recently.

Line said it plans to take Clova off the smartphone and into other devices such as smart earpieces. Takeshi Idezawa, Line chief executive, told the FT this week that “communication and transactions via smartphone displays are expected to decline. There will be a completely new ecosystem and the current messaging platform will shift to the cloud AI platform.”

Uber to apply for California licence after all

Just a couple of months after Uber moved its testing of autonomous cars to Arizona after falling out with regulators in San Francisco, the taxi company has said it will after all apply for the state permit it needs to test self-driving cars in California.

Uber moved to Arizona after refusing to apply for the $150 permit, ending its test of its self-driving Volvos after only a week. The change of mind comes hard on the heels of a blog post from a Susan J Fowler, former Uber engineer who painted a picture of a toxic workplace, alleging sexual harrassment and discrimination.

That was followed by the release of a video showing Uber CEO Travis Kalanick behaving aggressively with an Uber driver. Earlier this week, Kalanick pledged to “get leadership help”, so perhaps this move to regularise its position with California is part of a move to mend fences with its critics.